The markets recovered shortly after Genesis’ bankruptcy and a law enforcement action against Bitzlato, accused of laundering $700M, with Binance being the last destination for the funds. Bitcoin and Ethereum increased by 9% and 4%. The biggest outlier this week was the staking-as-a-service platform, Lido, which increased by 26% over the past week; users have been allocating billions to collect rewards. Increasing by 25%, Optimism came as the outlier in last week’s rally amongst scalability solutions. Cardano also stood out within the layer 1s last week, increasing by 9%. The jump could be attributed to the announcement of a new Cardano upgrade, SECP, capitalizing on interoperability and secure cross-chain deployment of decentralized applications (dApps). SECP is scheduled to tentatively launch on February 14. 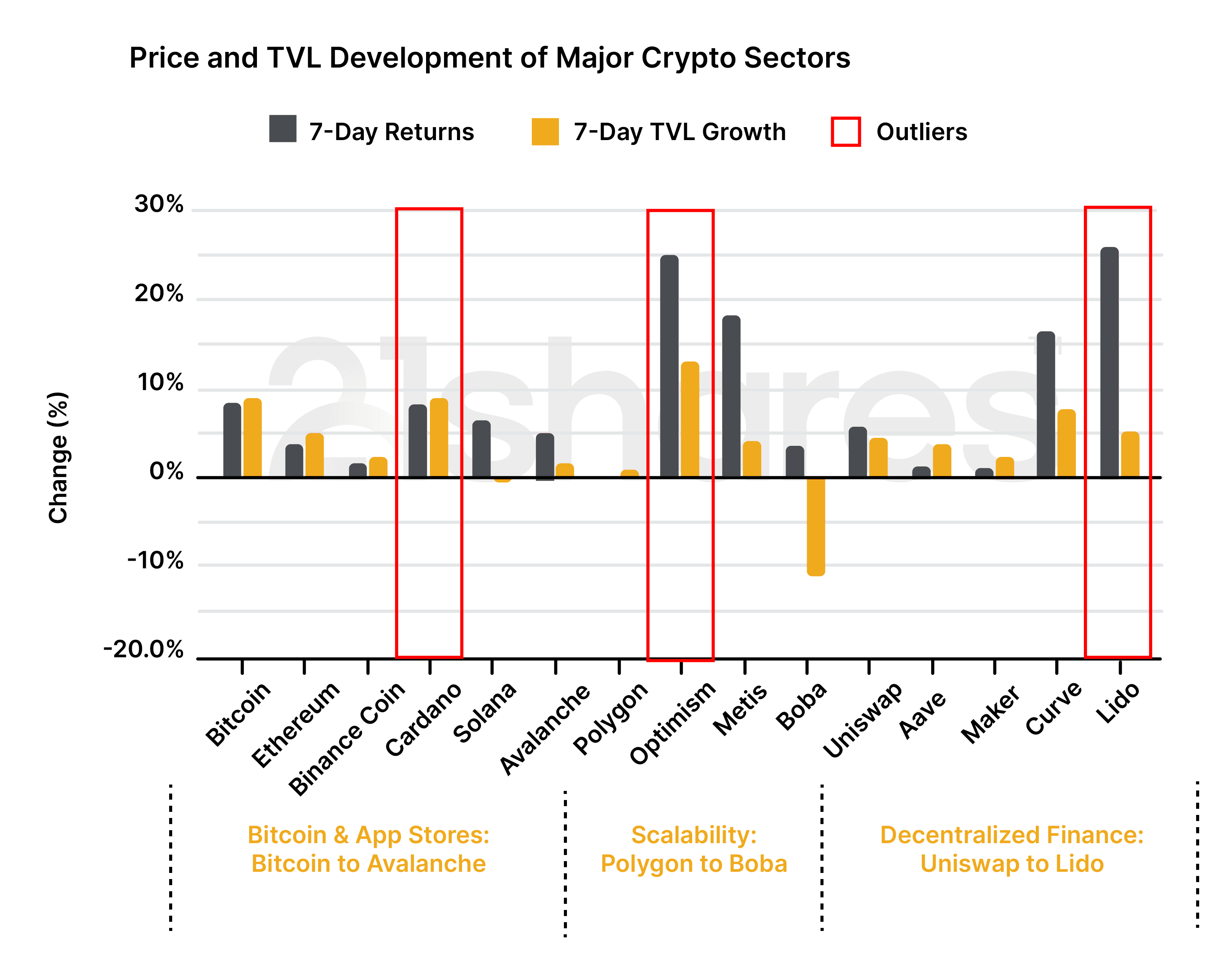 The chart above can depict the current market sentiment in the futures market, which has been conservatively bullish over the past few weeks. Investors between buying long and selling short futures contracts have been at a tight rivalry this week, with the exception of January 20 when the appetite picked up, leaning towards longing Bitcoin by 52.46%. 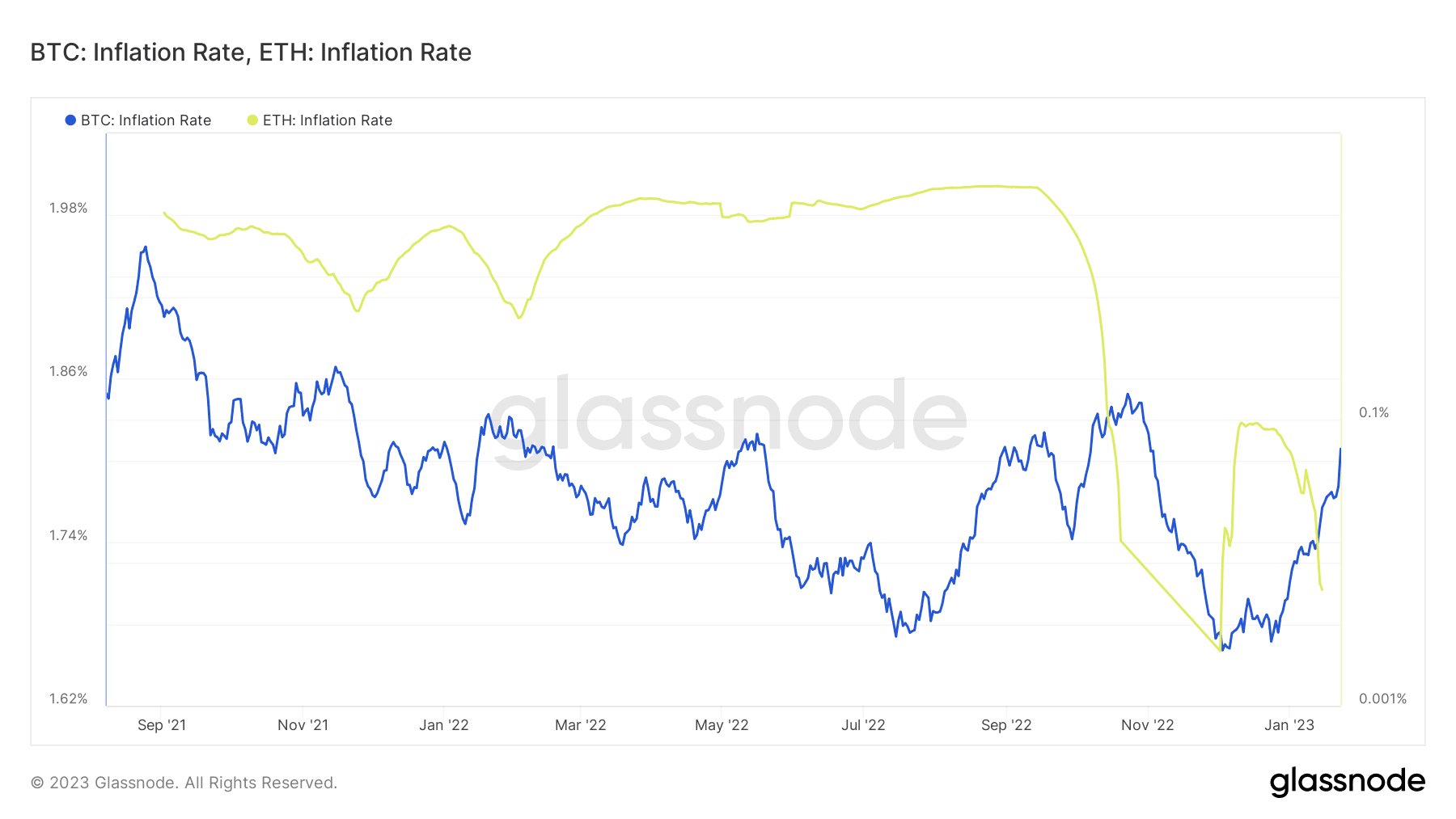 Since the Merge of September 15 last year, Ethereum’s supply change is now nearing -3K ETH, according to data collected by Ultra Sound Money. That means that ETH is gradually becoming a deflationary asset, thanks to a post-Merge mechanism that removes a portion of ETH that has been spent on transaction fees. That is in comparison to its rival cryptoasset, which has also progressed on the deflating front on the back of Bitcoin’s halving slated to happen next year.

Genesis filed for Chapter 11 bankruptcy protection, revealing they have less than $500M in assets, whereas its biggest creditor has a claim to $765M.. In a letter sent to its shareholders, Digital Currency Group (Genesis’ parent company) announced it’s suspending quarterly dividends to weather the market environment.

FTX in Court: The troubled crypto exchange reported to creditors that although it had recovered $5B, about $415M were still missing from reserves of both FTX International ($323M) and FTX US ($90M) due to hacks that have taken place since the bankruptcy filing in November. The exchange’s former CEO, Sam Bankman-Fried (SBF), challenged FTX’s report, saying the US arm is solvent. SBF wasn’t alone in this effort; the exchange’s chief regulatory officer Daniel Friedberg accused FTX’s lawyers and Ryne Miller of misconduct and submitted his testimony to that in an objection (filed by an FTX customer and creditor) to the retention of law firm Sullivan & Cromwell (S&C) in the exchange’s bankruptcy case on January 19. Despite the controversy, the objection was rejected by the bankruptcy court in Delaware, giving S&C the green light to continue representing FTX during its bankruptcy proceedings. With regards to SBF’s criminal court proceedings, the federal prosecutors seized almost $700M in cash and assets connected to the exchange’s former CEO.

Law Enforcement and Regulations: US Justice Department announced what they called “a major international cryptocurrency enforcement action” by arresting the founder of Hong-Kong-registered Bitzlato, accused of laundering $700M, and disclosing that Binance was one of three main counterparties along with Russian-based “Hydra” and “The Finika.” Europol seized $19.5M from Bitzlato and had a member of its senior management arrested. In other news, CFTC commissioner Caroline Pham called for a global standard for regulating crypto in a Bloomberg interview as a hedge against crypto meltdowns like FTX and Terra Luna. Japan’s regulators, on the other hand, want the US and Europe to treat crypto like they do traditional banks. The European Parliament’s final vote on Europe’s landmark crypto bill, Markets in Cryptoassets known as MiCA, is postponed until April due to an expected delay in translations.

Central Bank Digital Currencies (CBDCs): Countries are racing to solidify their central bank digital currency (CBDC) strategies. The digital yuan has been part of China’s circulating cash data since December and was used to buy securities for the first time ever. Bank of America said in a report led by Alkesh Shah that CBDCs and stablecoins are the organic evolution of money and payments. Thailand’s central bank will be implementing a CBDC for the Thai Baht wholesale market in the first quarter of 2023. The government is currently working with the Monetary Authority of Singapore (MAS) to handle remittances between the two countries using the new currency. On the other hand, the Bank of England is questioning the need for a digital pound after the European Central Bank’s publishing of their digital euro stocktake. To strengthen the role of the digital euro on the international scene, interoperability with other CBDCs will be crucial to facilitate cross-currency use. The lack of interoperability across CBDC systems may become one of the key weaknesses of these initiatives in contrast with globally-accessible fiat-pegged stablecoins.

Adoption: Russia and Iran are working on a gold-backed stablecoin to de-dollarize foreign trade. The project will only be possible when Russia regulates cryptoassets, which has been in the works since September. Other signs of adoption that happened last week include the following: 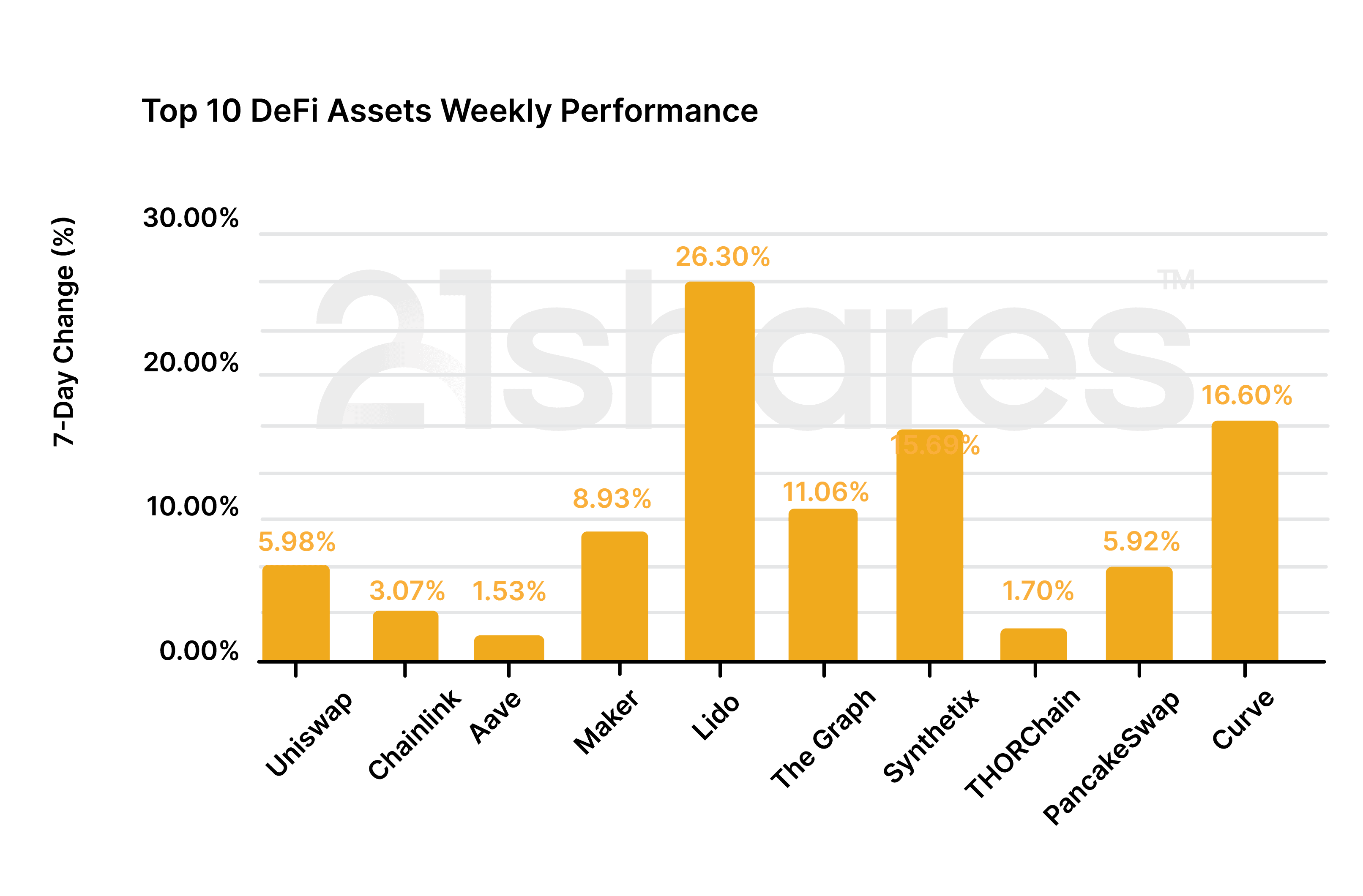 Web 3 in WEF: A panel in Davos, led by Circle’s CEO Jeremy Allaire and CoinDesk’s Michael Casey, concluded that the economy would become increasingly tokenized in the future. Carbon credits, housing, electricity, government bonds, foreign exchange, and other real-world assets will be traded on the blockchain. Public services are in the process of tokenization in South Korea; Seoul is launching a digital replica of the city with the aim of improving its public services, in contrast to public concerns that this project is a misuse of public funds. The “public metaverse” is planned to be fully implemented by 2026; users can get tax consultation and access counseling. Additionally, the public metaverse will also make space for a support center for struggling SMEs.

The Polygon Ecosystem is still literally making moves, as NFT marketplace Rarible announced the expansion of its white-label marketplace building tool on Polygon. A Solana-based Web3 game, Synergy Land, is also moving to Polygon, who said they had enlisted Xternity to streamline the game’s migration. Powered by Fireblocks, Xternity is a secured, both self-custody and direct custodial wallet specifically designed for gamers. Web 2 companies seem to be harvesting the fruit of their integration with Web3 last year. On Instagram, the Polygon-based collection Aku’s Dream Lab sold out in 11 seconds. 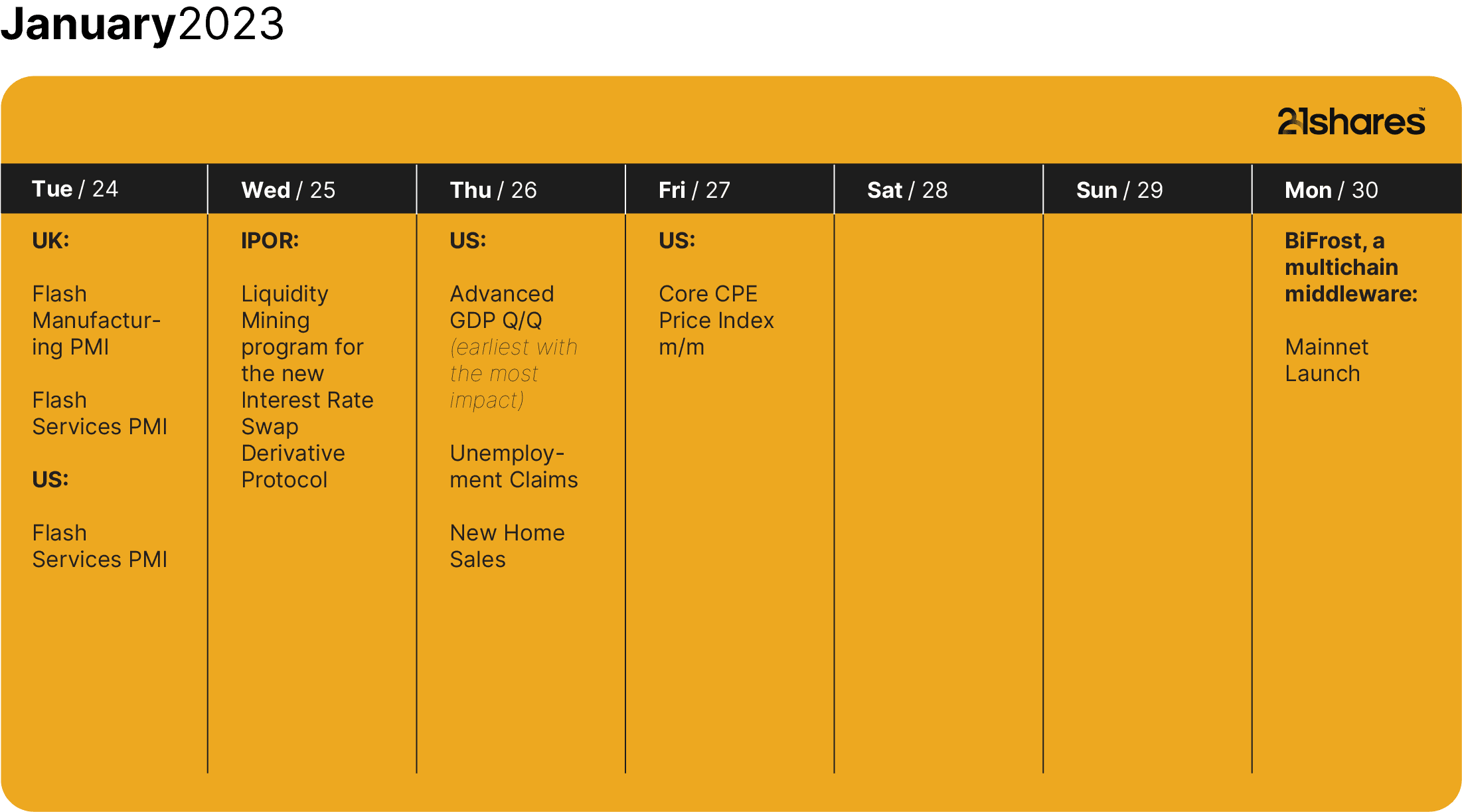 By clicking “Sign up” you expressly acknowledge and consent that this will be treated as a contact by you at your instigation and own initiative and any information sent to you in response will be treated as done on a reverse solicitation basis.