At 21Shares, we are pleased to announce 3 additional ETPs in our product line listed on the SIX Swiss Exchange:

The total cryptoasset market value dropped by approximately 10% in the past seven days. As a result, the performance of Bitcoin went further downhill, returning -15% in the same time frame. One of the relevant reasons attributed to this drawdown seemed to be the prospects of an EU-wide ban on Bitcoin mining orchestrated by some politicians in Sweden and Norway. If other countries in the EU signal a similar position on the subject, this could create a short-term downward pressure on the underlying asset. At current levels, the cost-basis indicator of short-term Bitcoin investors, also called “Short-Term Holder Cost Basis'' demonstrates that Bitcoin’s realized price is at $53K (see image below). As such, any moves near that level could turn out to be bearish for newcomers representing the majority of the selling pressure, as discussed in our previous investor letter. 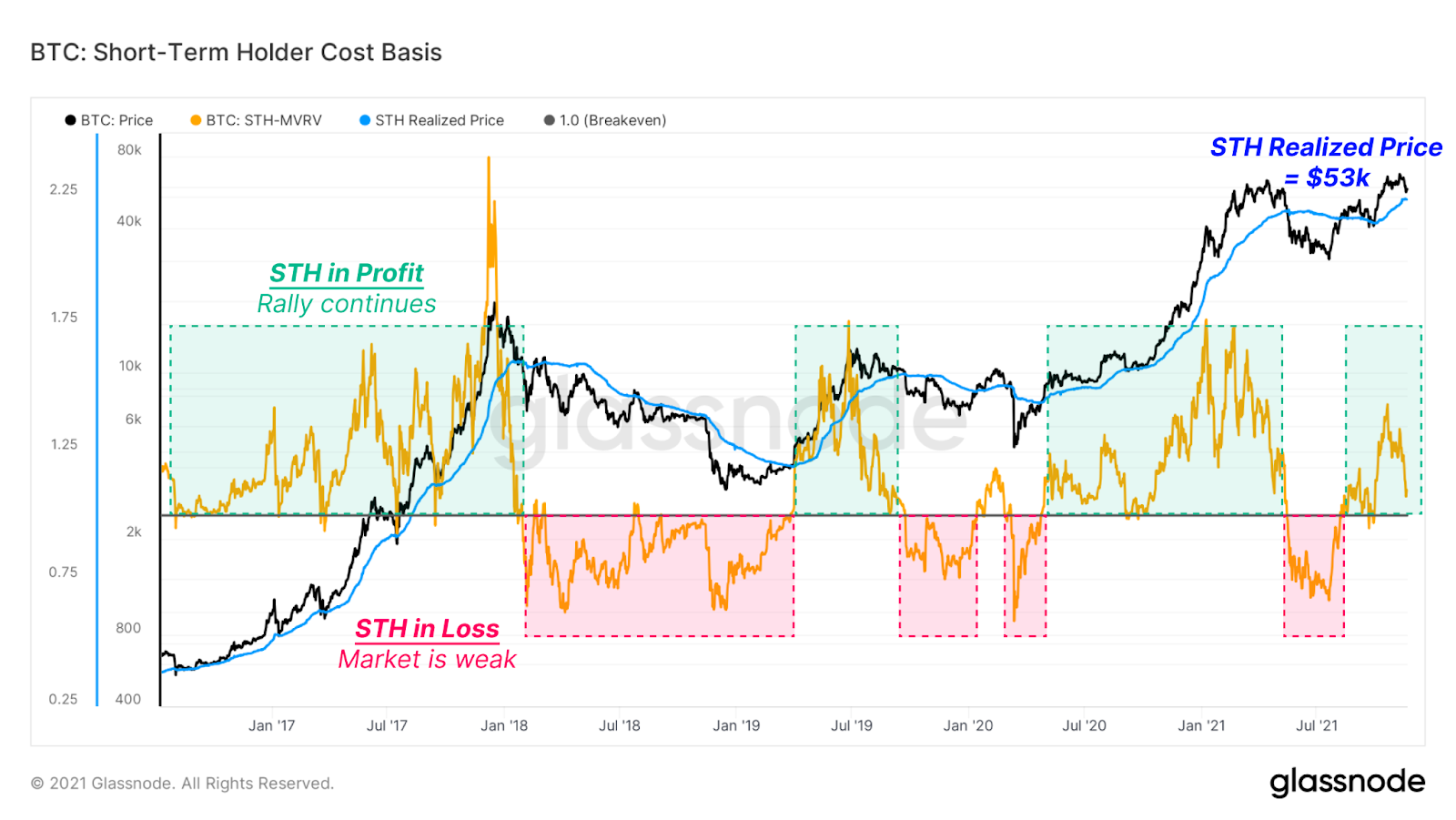 The directors of Sweden's financial services and environmental protection regulators called for an EU-wide ban on proof of work crypto mining due to a significant uptick in renewable energy consumption used by bitcoin miners. Norway’s local government and regional development minister, Bjørn Arild Gram, took a similar stance on the matter.

Even if Bitcoin was 100% mined with clean energy, which is the case in Norway and Sweden, this debate comes down to whether Bitcoin deserves to exist to be eligible to use any energy assets. Questioning the existential merit of an asset class is a fruitless debate when this involves conflicted ideological ideas rather than objective and data-driven research to make policy-making decisions. There is evidence that Bitcoin has been beneficial in various countries for different purposes. For example, Bitcoin has served as a censorship-resistant savings account and payment network in places like Venezuela and Lebanon or as a complement or for some risk-taking investors as a replacement to gold in a portfolio optimization context.

In addition, Bitcoin consumes less energy than gold mining & production, copper production, and the entire financial sector. However, commodities mining also has other significant issues, especially in emerging economies, such as forced labor and the negative impact of land excavation and appropriation, unlike Bitcoin mining ran by computers. 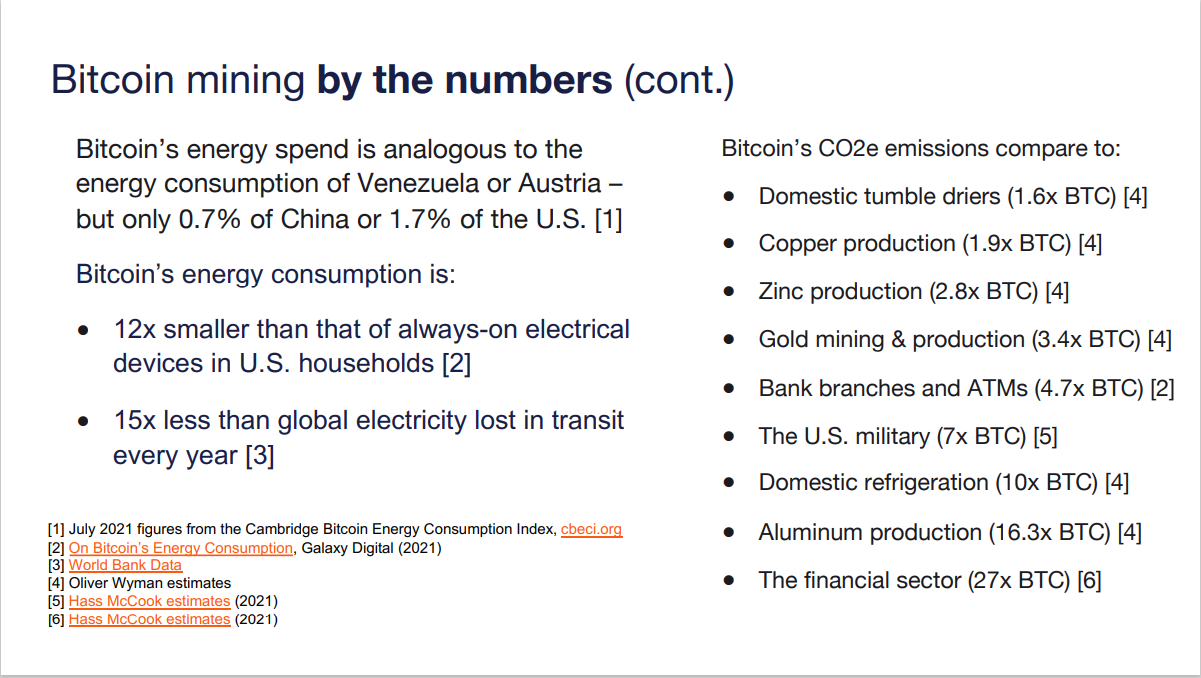 It’s also important to note, Bitcoin can’t exist without the mining mechanism even though almost 90% of Bitcoin’s circulating supply has been mined. Mining is Bitcoin’s heartbeat to function as a censorship-resistant payment infrastructure properly. Bitcoin mining serves various functions:

At 21Shares, we are closely monitoring the evolution of the situation. According to Euronews Next, the European Commission told them it encouraged the industry to "migrate applications'' from energy-intensive proof-of-work blockchains to less demanding protocols like proof of stake and hybrid consensus models. It is improbable that Bitcoin will switch to a Proof-of-Stake (PoS) security mechanism any time soon, unlike Ethereum and the privacy-coin, Zcash. As mentioned earlier this year, the environmental concerns over Proof of Work have formed a narrative towards environmentally-friendly crypto networks relying on Proof of Stake, such as Avalanche and Solana. This pattern could remain en vogue, despite other risks associated with those embryonic networks. 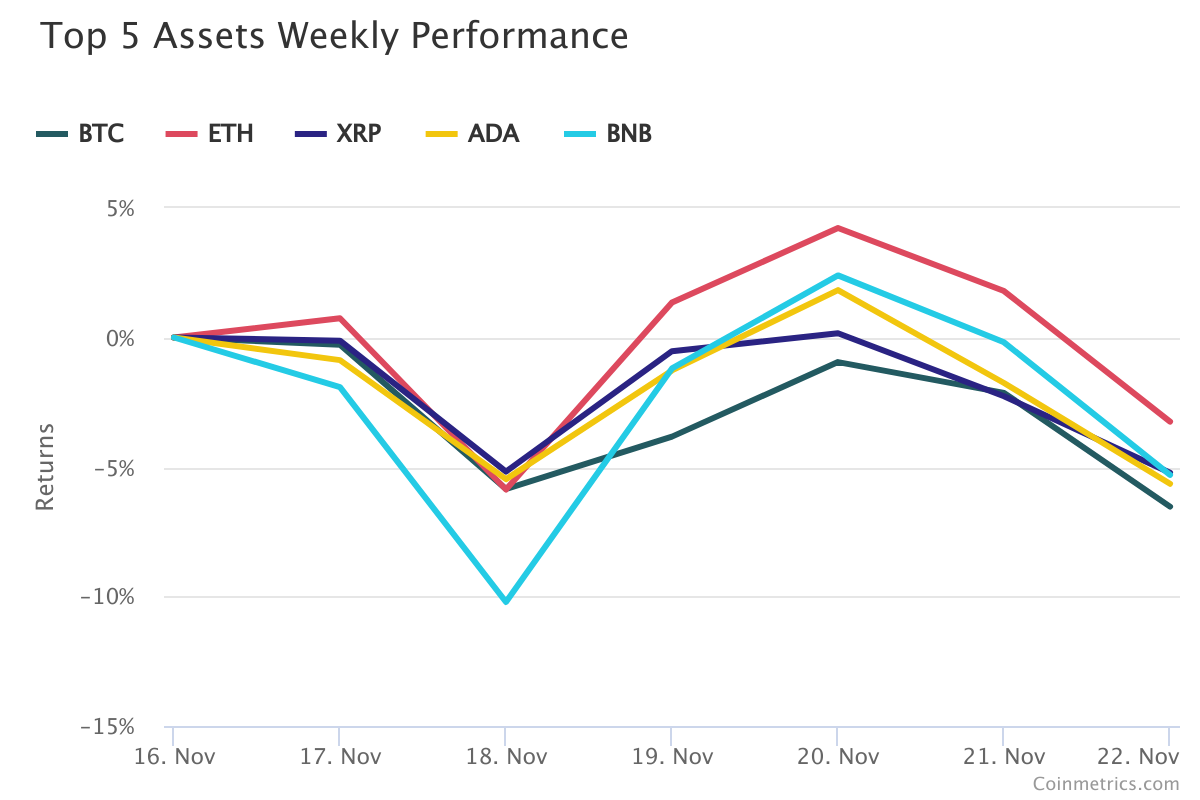 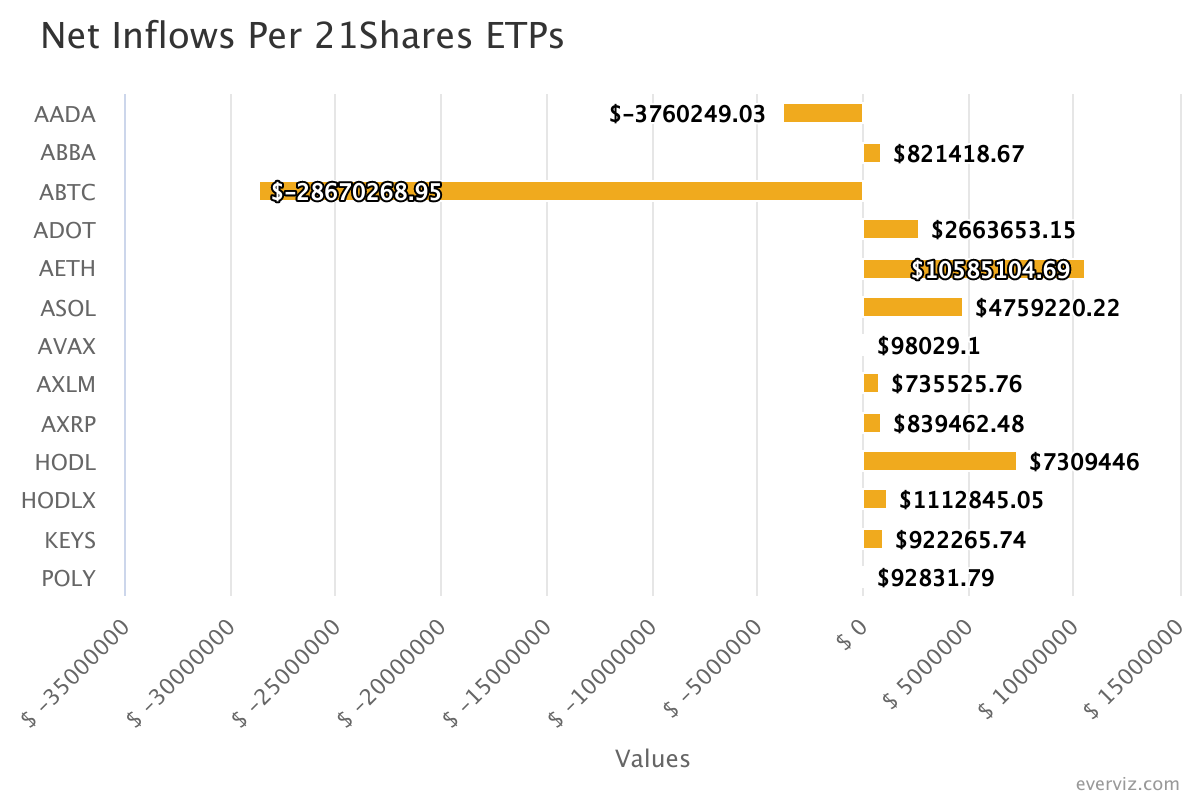 As previously mentioned in this newsletter, we’ve added three ETPs to our portfolio of 80 listings. ETF Stream picked up the news, quoting our partner Flow Traders. “We are excited to be supporting the launch of the new ETP and deepening our successful partnership with 21Shares,” says Michael Lie, head of digital Assets Trading at Flow Traders. “This listing is another clear indication of the increasing expectations of both investors and issuers striving for more innovative products.”

The Financial Times also featured us in a story about the popularity of crypto funds amongst managers. “Assets in European exchange traded products and mutual funds with cryptocurrency exposure have topped €10.5bn, according to Morningstar data, showing the potential appeal of these products for asset managers,” reports the Financial Times, going on to elaborate on the key players in the market, mentioning the $2.1 billion in 21Shares’ management.

Binance Smart Chain Faces Scrutiny by Community Ahead of Upgrade

Users on Binance Smart Chain (BSC), a DeFi blockchain competing with Ethereum, have been experiencing malfunctions primarily due to the reduction of block time to 3 seconds as opposed to the average 13 second block time on Ethereum. A few days ago, BSC’s user traction reached an all time high, recording 14.7 million transactions. Users are accusing Binance of throwing its community under the bus for more profit. The raging BSC community took their frustration to Github, one user called the blockchain a lost cause. Developers are complaining about the lack of code review, zero response to bug reports especially those about non-syncing nodes, there also has been zero beta testing making the blockchain pile into chaos.

As Binance describes it, BSC is a dual-chain architecture announced into existence in 2020, that empowers its users to build their decentralized apps and digital assets on one blockchain and take advantage of the fast trading to exchange on the other.

This could primarily affect Binance’s native cryptocurrency, the Binance Coin (Ticker: BNB) which as of writing withstands at $599.61 (7.21%). Frustration can drive developers (back) to building their apps on Ethereum or other ecosystems such as Avalanche or Solana and essentially abandoning BNB.

This also comes at a really bad timing amid regulatory clampdowns in the UK and more recently Japan and Singapore against Binance’s exchange. Having regulators and developers against you is obviously a troubling standpoint that only a vigorous upgrade can turn around.

Slated to happen on November 30, the Bruno Upgrade or BEP-95 v1.1.5 will impact the validators or full node operators. After the activation, the blockchain should be able to handle a series of new features and eliminate existing bugs. 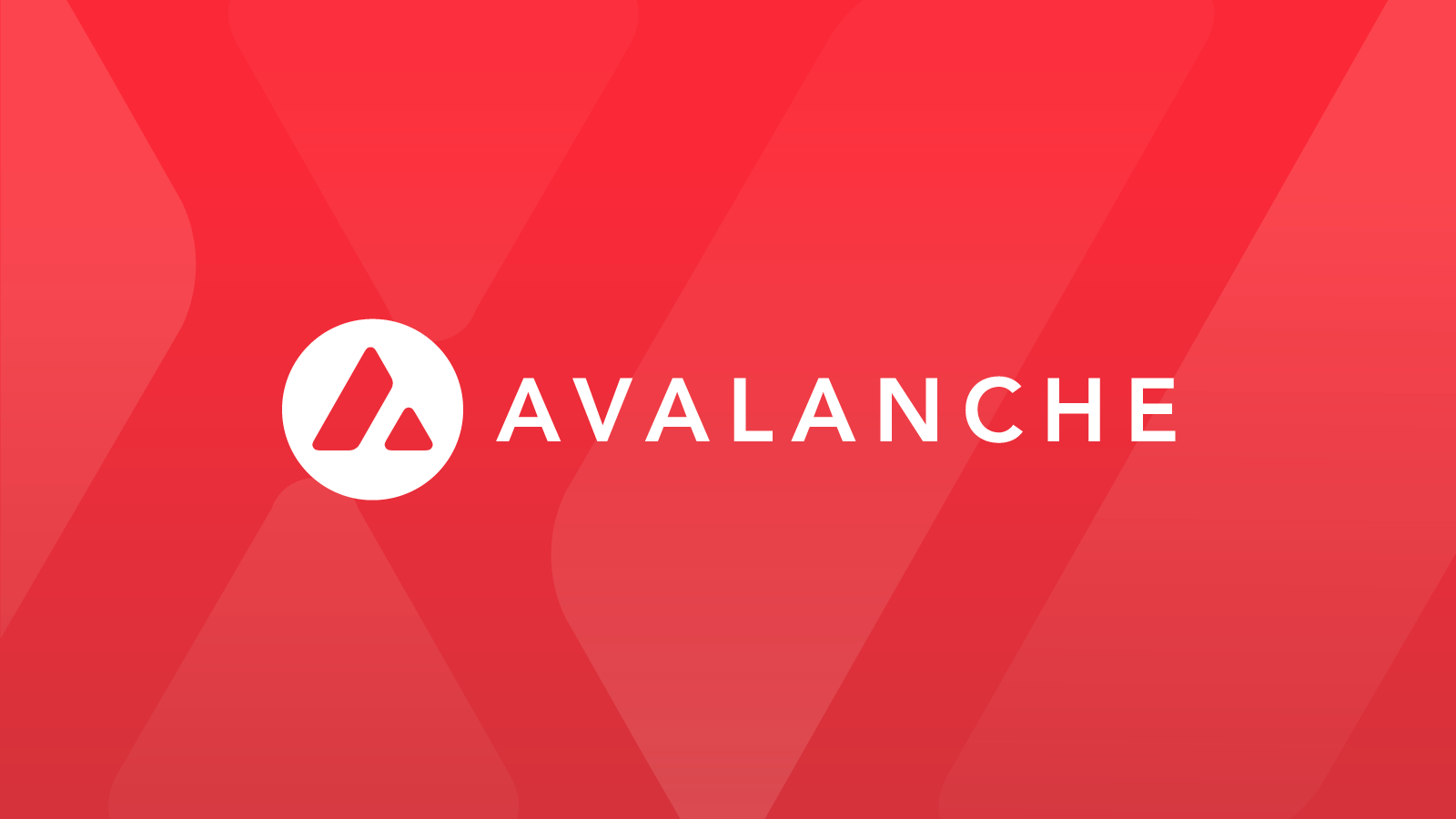 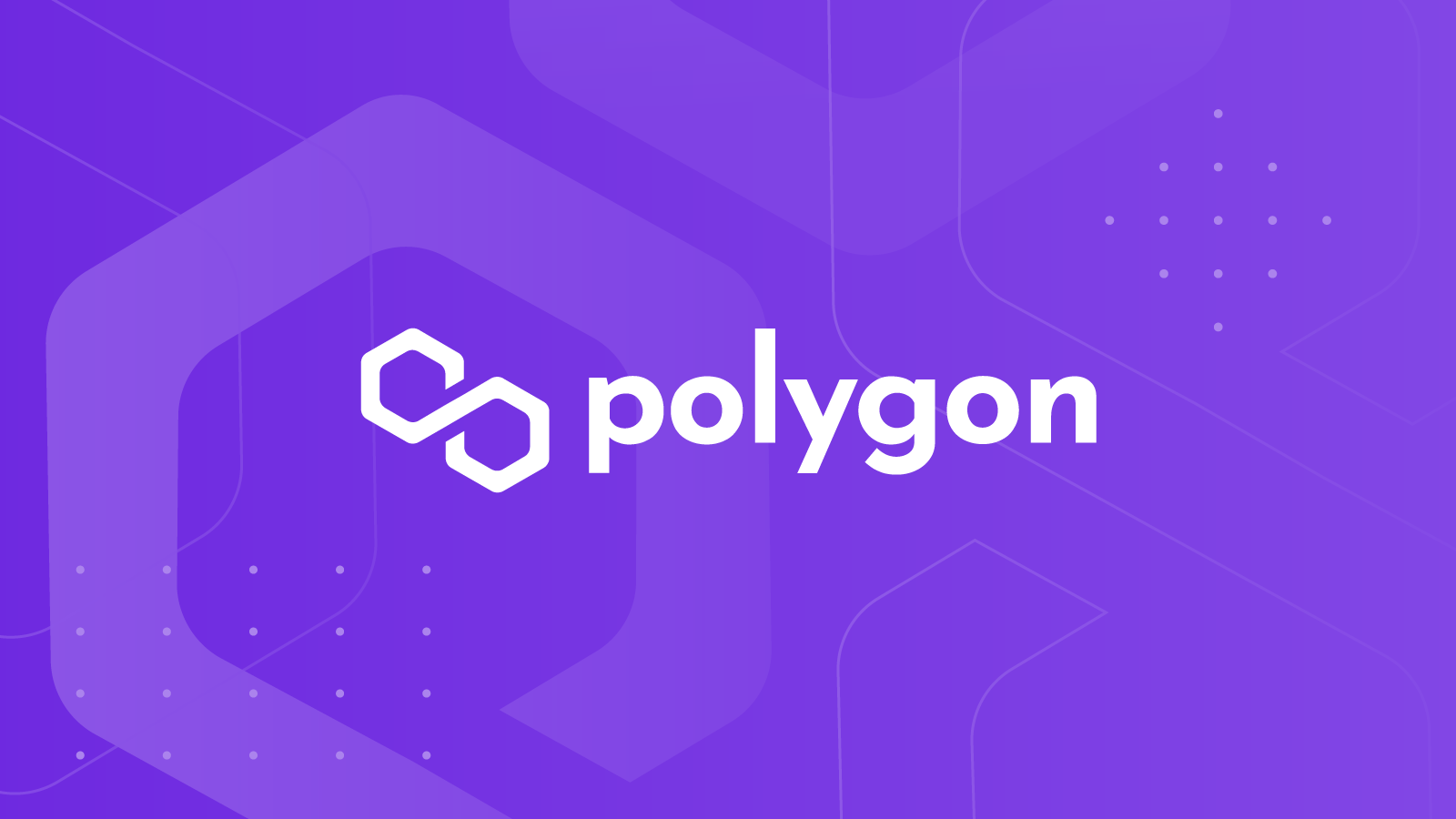 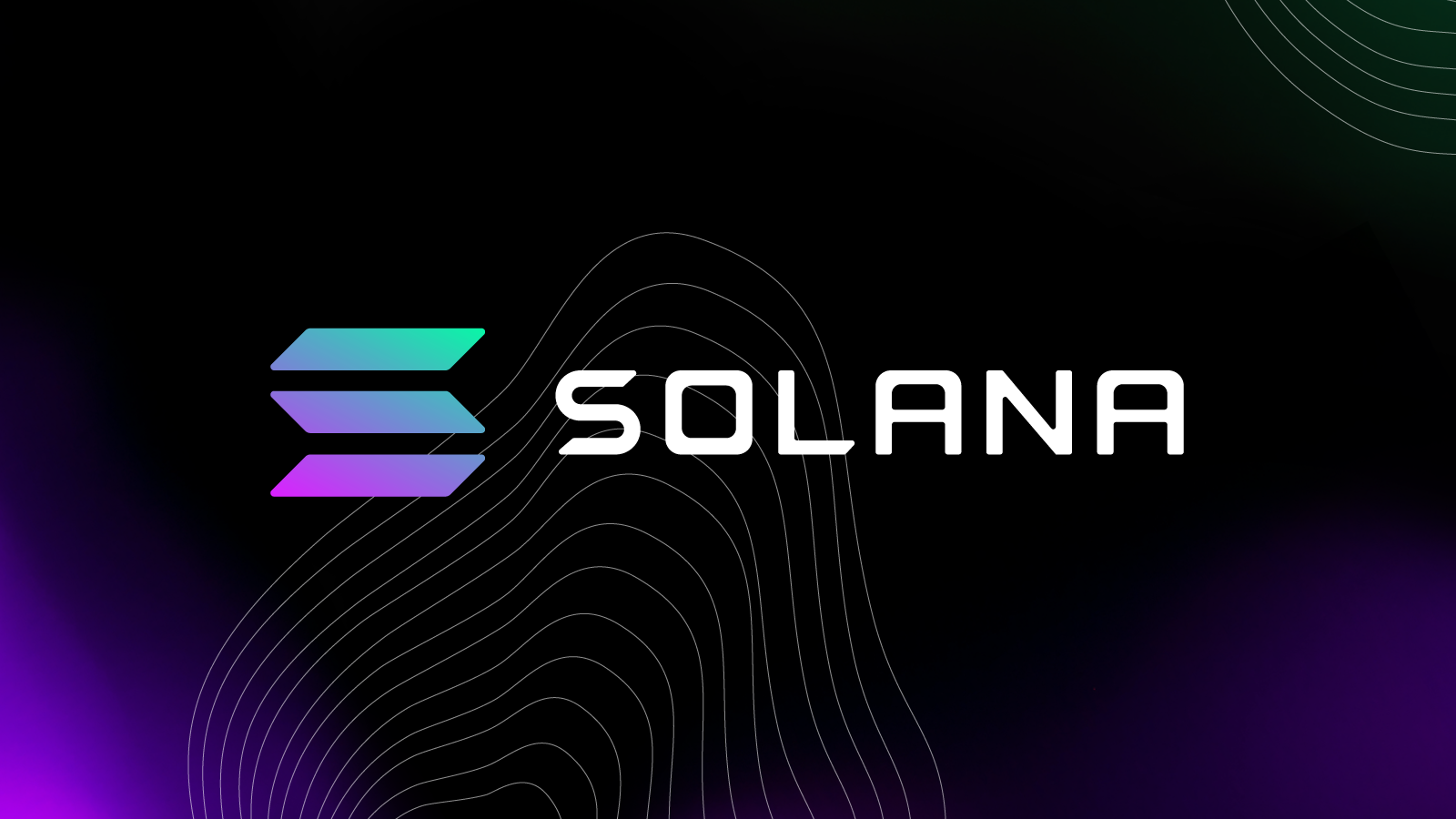