21Shares successfully carried out a stock split of our range of crypto ETPs which has been effective since yesterday, April 12th. More details about the split are available here.

Please do not worry about the allocation or lack of shares within your portfolio following the stock split. Your allocation will soon reflect the new appropriate amount per product. This is a settlement process with your broker that we have no control of due to the different settlement entities.

The large news of the week and likely the largest catalyst of the cryptoasset market for Q2 2021 is Coinbase’s direct listing which will be tomorrow (Wednesday 14 April 2021). Coinbase is likely the most valuable company within the cryptoasset market and its direct listing represents a large step forward for the legitimization of the whole industry.

Based on secondary market prices Coinbase (ticker: COIN) will likely go public at a valuation of more than $100 billion; based on both the company’s outstanding financial performance in Q1 2021 and the general market fervour for cryptoasset exposure. For example, on Coinbase’s Q1 2021 performance the exchange could do over $7B of revenue and it will go public as a noticeably profitable company (a rare feat).

A few months ago we wrote an article arguing that the upcoming Coinbase direct listing would lead to a repricing of BNB, the utility token of Binance, the world’s leading exchange. Our thesis has been proven true with BNB returning 190% since we released the report and over 1,400% since the start of the year. Other exchange tokens have performed similarly well.

Despite the fact that BNB is a token and not representative of equity in Binance (it does not come with the same legal rights), the market is now pricing the asset at around $90B which is a similar level to that of Coinbase’s likely fully-diluted value. We expect the success of the Coinbase direct listing to lead to a repricing of the entire cryptoasset market — both businesses and cryptoassets. This will likely be a strong catalyst for Q2 2021 market growth. 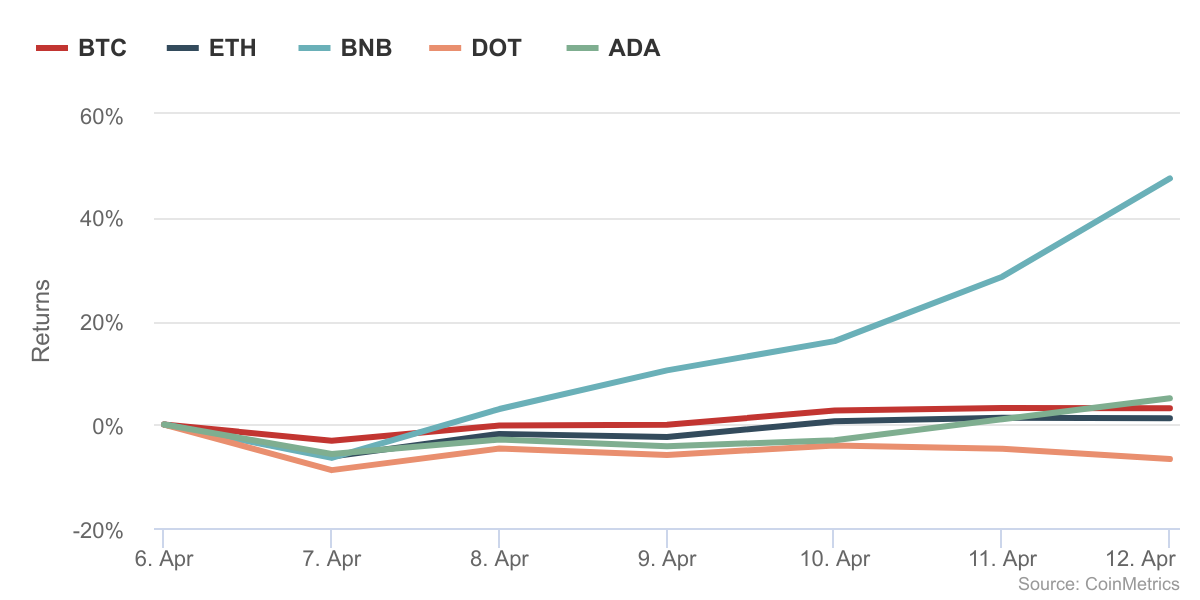 You can learn more about our products here. 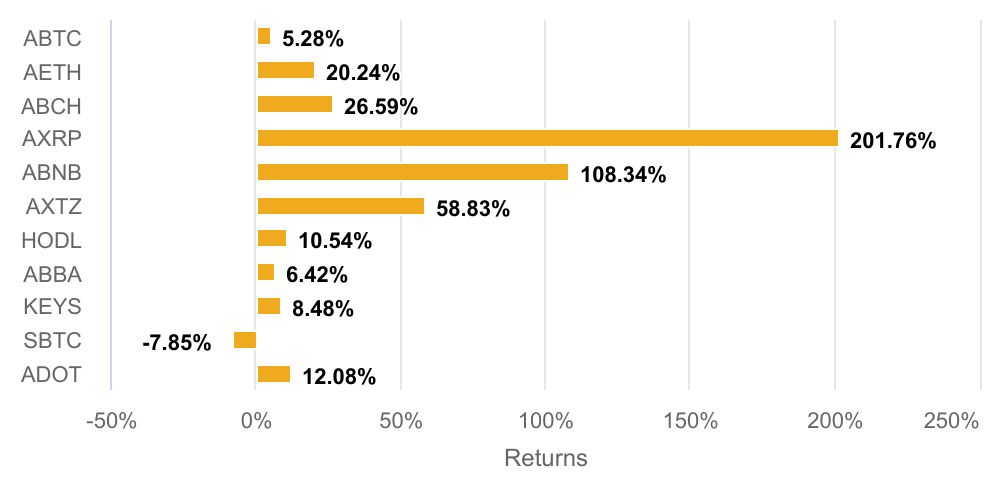 We have a new addition to the team, please welcome Marco Infuso our Managing Director for business development in Germany, Switzerland and Austria. Prior to 21Shares, Marco worked at Bank Vontobel, Commerzbank, Lombard Odier AM, and Pioneer Investments. ETF Stream featured Marco in their latest article “21Shares raids Bank Vontobel for latest appointment" that you can read here. 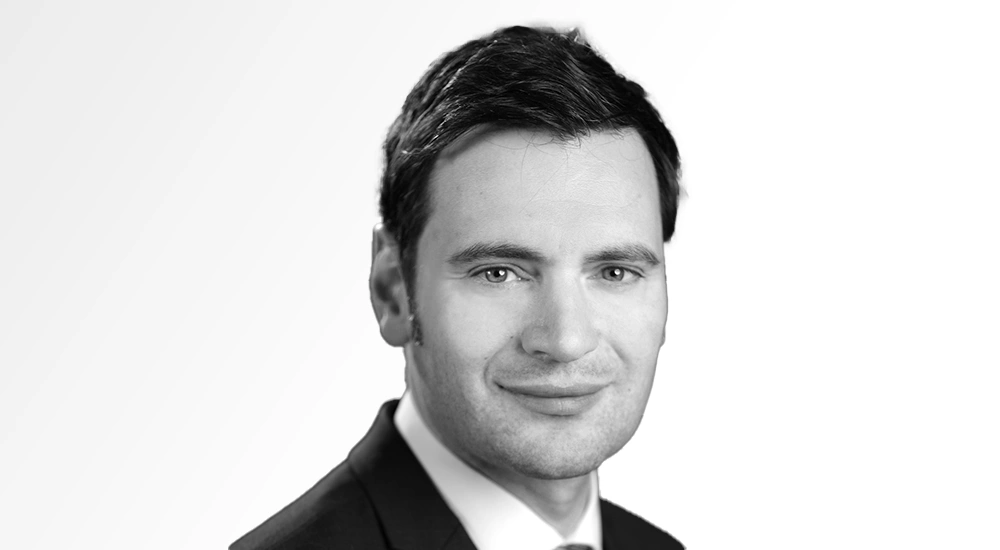 Our Head of Switzerland, Sina Meier was invited by CV Labs as a speaker in their webinar delving into the institutional adoption of cryptoassets in Crypto Valley. Give it a listen here.

Finanz und Wirtschaft, the largest business editorial office in Switzerland featured 21Shares exchange-traded products in their article entitled “Invest in Bitcoin & Co. - but how?”. You can read the article here.

Our Head of Southern Europe, Massimo Siano, featured in Diversamente Finanza discussing portfolio allocation for cryptoassets. Give it a read here. Also save the date, on April 15th, Massimo is invited to speak on the panel of ETF Day organized by Forfinance Group. Register here.

Finally, Massimo was interviewed by La Reppublica to give his views on the upcoming direct listing of the US leading crypto exchange, Coinbase. You can read the full article here.

Morningstar, the leading provider of independent investment research in North America, Europe, Australia, and Asia — published their new article on the best and worst-performing ETFs and ETPs of this past month.

In March, our Binance ETP (ABNB) was the best performing ETP in the world with a performance of over 35%. BNB, the utility token of the leading crypto exchange, Binance, has reached a market capitalization of more than $88 billion as of writing, with a price per asset trading at over $570. In the last 12 months, BNB surged by more than 3,918.0%, trading at $13 a year ago, on the back of Binance’s increasing lion share in spot volumes representing about 64% of the total trading volume in March. For the record, amongst the top 20 best performing ETFs and ETPs of this past month, 8 are 21Shares exchange-traded products as you can see on the table below.

The crypto industry had a historic first quarter in terms of trading volume. The monthly spot volume across crypto exchanges was over $1 trillion in both February and March, and slightly less in January, around $977 billion. According to Coinbase’s Q1 earnings, $112 billion or about 54% of the assets invested on the exchange come from professional investors and institutions who are more likely trading via their OTC desk such as Ruffer Investment that used Coinbase to execute its $745 million purchase of Bitcoin. 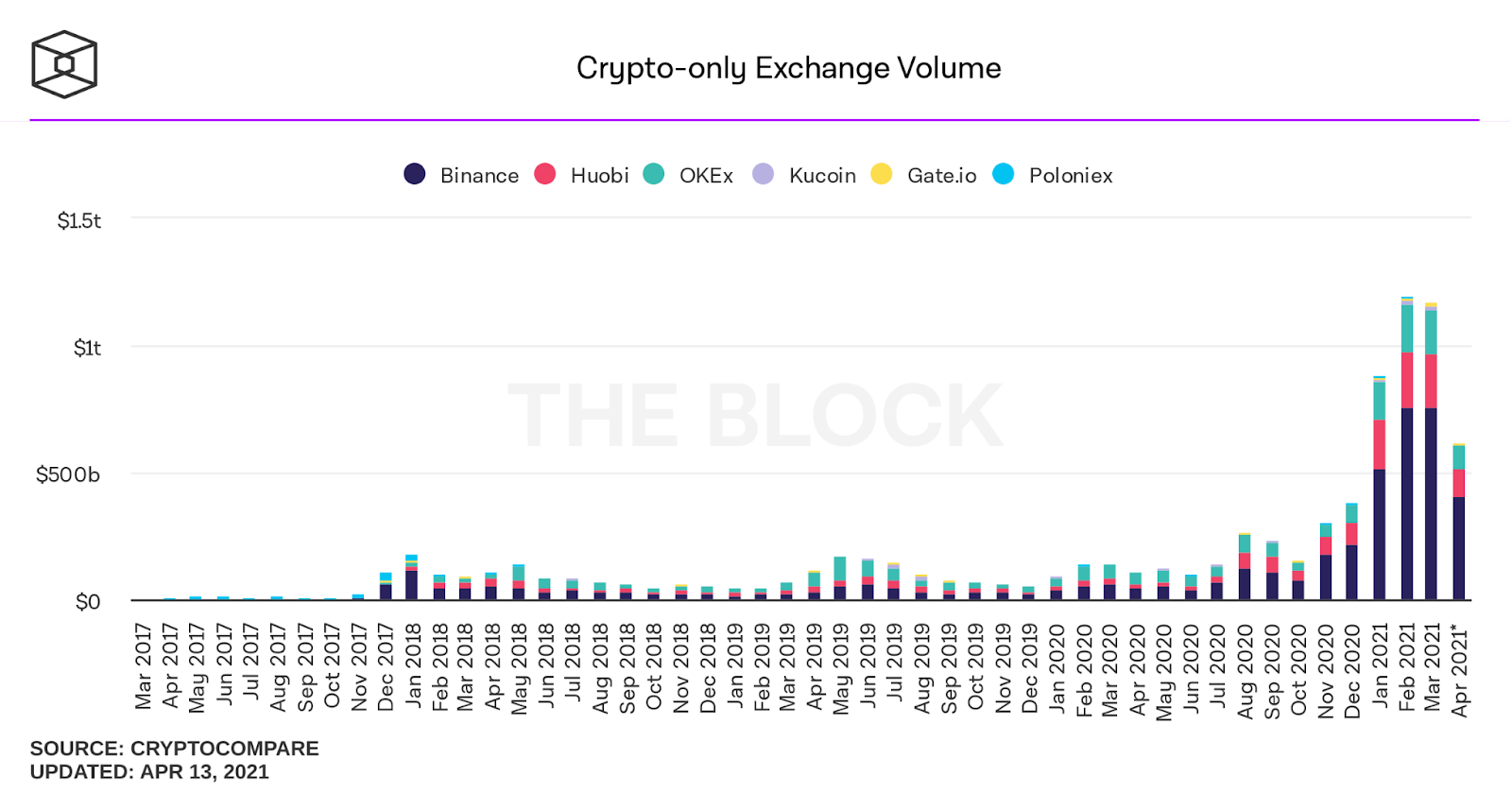 As such, this doesn’t come out as a surprise to witness the majority of our product suite — the largest in the world, featuring amongst the best performing ETFs and ETFs in the world. In fact, the results are a testament to the unprecedented levels of adoption, recognition and acceptance of crypto innovation around the world. For example, on April 11th, Microstrategy, the American business intelligence company, announced that its boards of directors will be paid in Bitcoin instead of cash for their service — becoming the first publicly traded company to do so. In the same vein, the long tail of investment products saw inflows of $83 million in the past week, while today Bitcoin broke for the first time in history the $63,000 mark with year-to-date performance of more than 117%.

“In approving bitcoin as a form of compensation for Board service, the Board cited its commitment to bitcoin given its ability to serve as a store of value, supported by a robust and public open-source architecture, untethered to sovereign monetary policy.” — Microstrategy 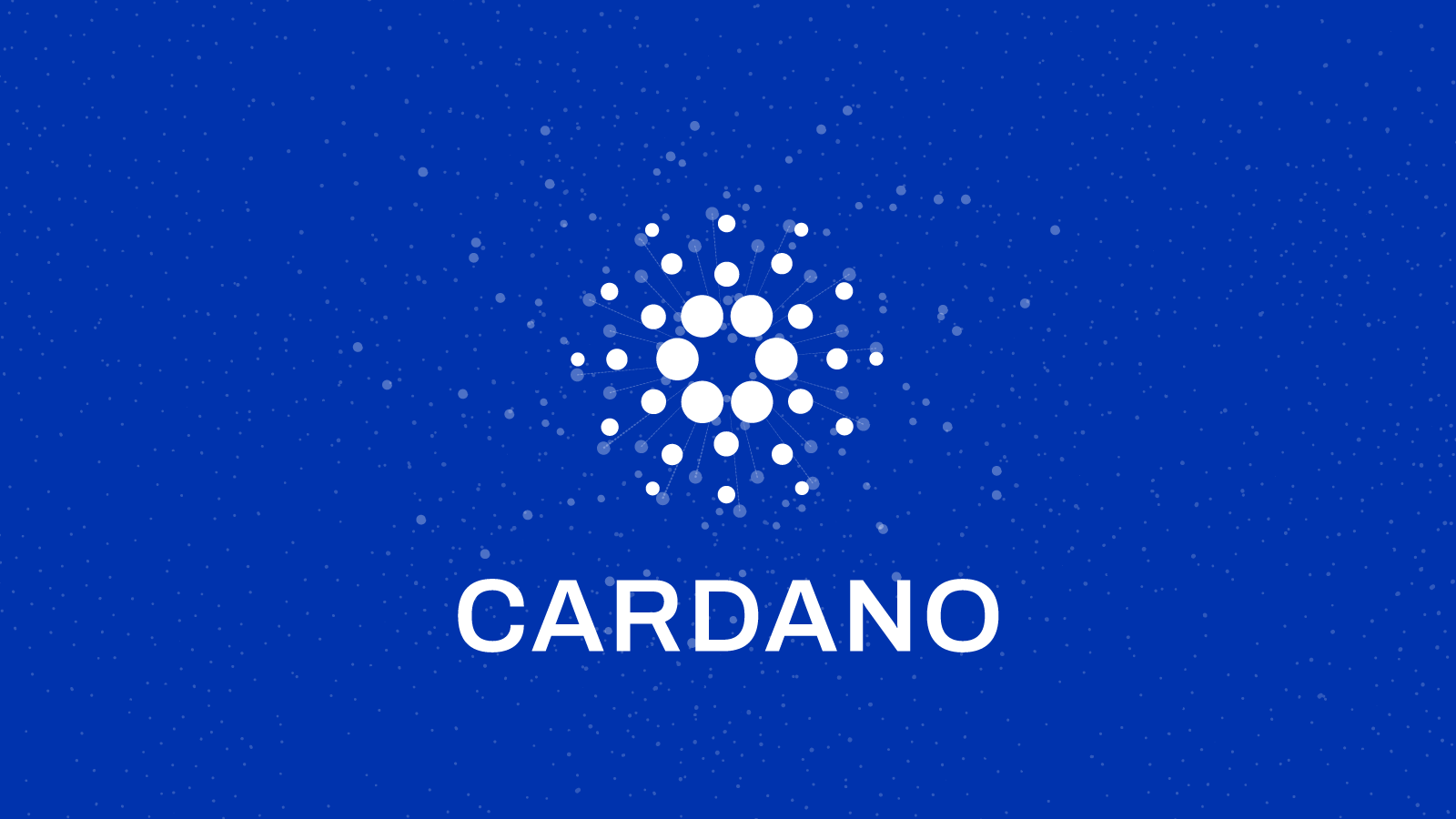 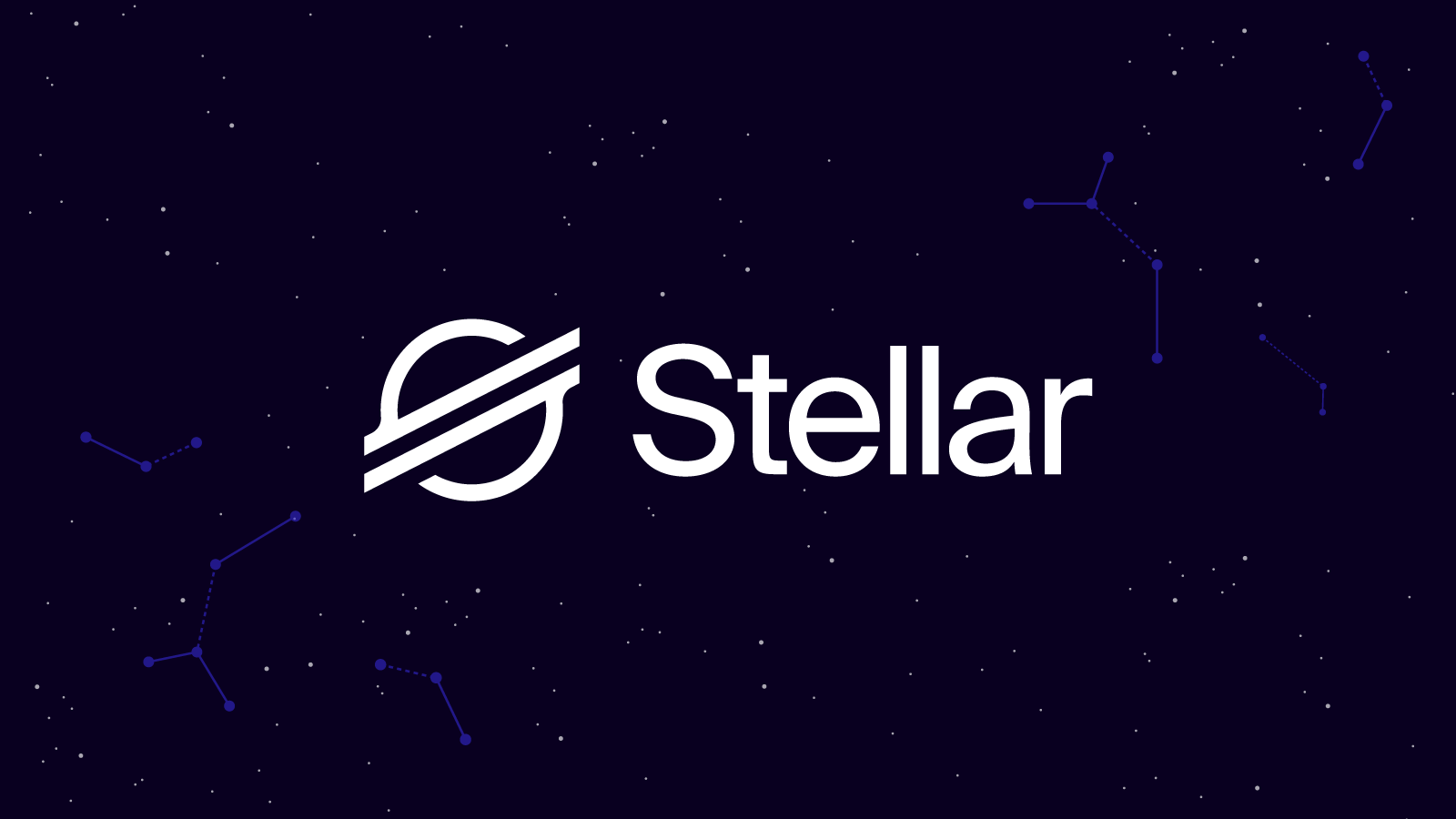