Insight
2021 Outlook for Bitcoin and the Crypto Industry 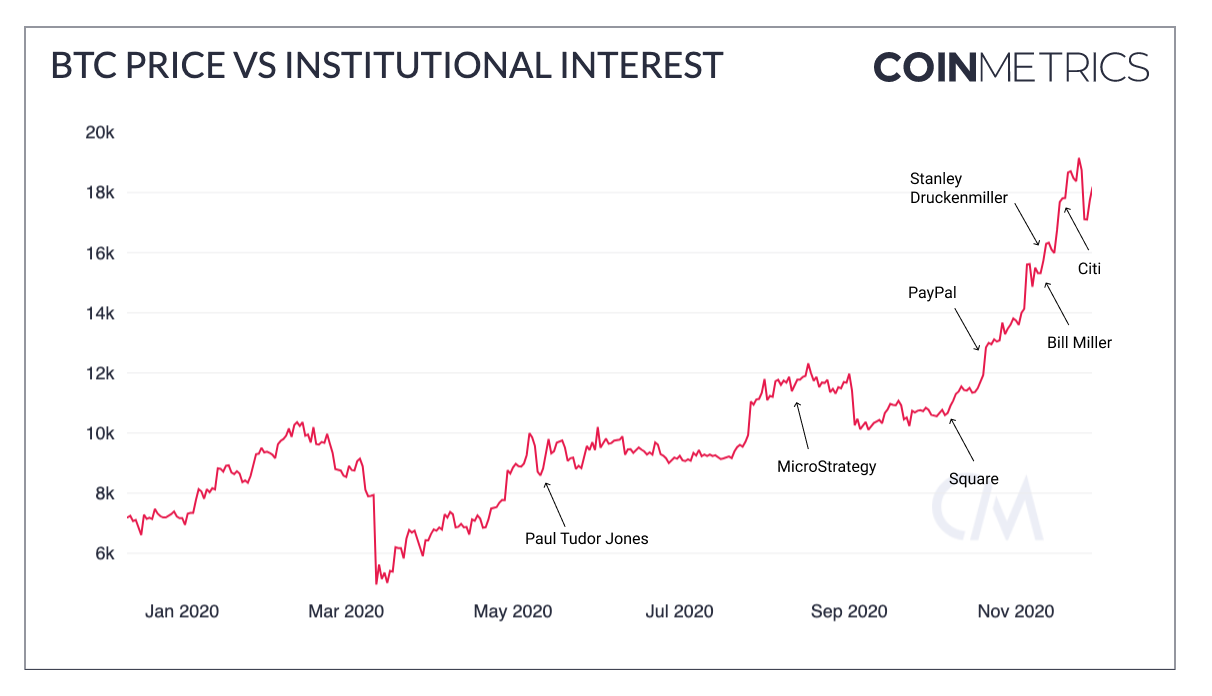 Bitcoin’s price surged by more than 17% over the past 7 days by breaking above the $25K mark for the first time in history on December 25th, before topping $28K a couple of days later. This price action has been predominantly driven by retail investors, as banks and financial institutions were likely not as active on Christmas Day and during the weekend, which is a testament to the awakening interest in Bitcoin for the general public. On top of that, positive coverage on Bitcoin by renowned institutions such as the Wall Street Journal has helped fuel this positive feedback loop.

As we head towards 2021, reflecting on this year with data points is particularly crucial and at the heart of 21Shares. The year 2020 has been nothing short of eventful starting with the current health crisis, which induced a market crash as you can see on the chart below. Equity markets buckled, volatilities and correlations spiked while bond yields bottomed akin to the 1929 stock market crash. As a result, social-distancing and containment measures have significantly accelerated, by orders of magnitude, the adoption of digital services including Bitcoin as I told the leading crypto journal Coindesk: “the digital nature of cryptoassets with a finite and predictable supply uncorrelated to traditional monetary and fiscal policies with transportability that do not require social contact, have the chance to increasingly become an attractive asset.” What has been achieved in less than a year would have certainly taken decades to play out in normal times. As such, historians might consider this pandemic as a defining moment of the 21st century on many fronts.

Billions were invested in Bitcoin so far this year from notable institutional investors and corporations — starting with the legendary hedge fund manager, Paul Tudor Jones in early May. But it took a few more months mainly in the second half of this year for institutional interest to take off and reflect in an uptrend in Bitcoin's performance which was specifically marked by the announcements of investments in the asset by Square and Paypal as you can see on the graph below.

For 2021, at 21Shares, we will expect continued institutional interest in the US and in Western Europe with larger investments coming from conservative financial institutions with billions of dollars in assets under management, similar to Insurance giant MassMutual that purchased $100 million of Bitcoin. Additional dollar amounts will also be poured into the Bitcoin infrastructure. We have witnessed early signs this year with the rise of Bitcoin-mining institutionalization specifically in North America alongside the recent support of the Bitcoin ecosystem such as Square's $10 million initiative to foster clean-energy-enabled Bitcoin mining.

The positive reporting on Bitcoin from media giants like The Financial Times and The Wall Street Journal alongside from the Chinese State Media set the tone for an expansive adoption across the board especially with the looming Coinbase IPO effectively becoming the first sizeable US-based crypto business to go public. This IPO will raise more awareness on Bitcoin and the rest of the crypto market and will likely put Coinbase amongst the top 15 FinTech apps in the world. A Bitcoin ETF in the US and Bitcoin allocations by cities’ treasury reserves and central banks such as the Chinese central bank have the chance to become major drivers of various macroeconomic Bitcoin-related narratives going forward. For the record, as of early December, the combined AUM of institutional-grade products only accounts for 2.52% of the entire crypto market value. Due to counterparty risk and fiduciary responsibility, institutional engagement is expected to grow in tandem with the expansion of regulated financial products such as the 21Shares product suite.

In addition, the general public interest which remained relatively low this year will increase in tandem with higher price levels in the foreseeable future as Bitcoin just exceeded $0.5 trillion in market value — therefore the number of crypto holders currently at 100 million will surpass the 500 million mark.

The nascent crypto category of Decentralized Finance, totaling over $14 billion in AUM will continue its pace and will likely accelerate especially once products offering institutional-grade security and better user experience become comprehensively accessible outside the crypto community. The growing usage of DeFi will boost the buying pressure for Ethereum as the main settlement infrastructure for decentralized applications and the multi-phase upgrade of its blockchain — ETH 2.0 will undeniably help this growth expectation. In the same vein, the top 30 cryptoassets by market value will likely change and be more populated by DeFi projects such as SNX, AAVE, and YFI but also by Ethereum contenders such as BlockStack.

On the final note, in 2021 we’ll see more regulatory news as regulators across the world attempt to continue to professionalize the industry, with the news of the SEC's lawsuit against Ripple Labs and XRP being an example of this. Long-term this is likely to be positive for the industry as regulatory actions provide much-needed clarity for crypto businesses, professional and retail investors.