This Month in Crypto: Executive Summary

Markets have persevered over the past month on the back of inflation pressures sandwiched by the burgeoning war in Europe and the COVID-zero measures in China, adding flame to the fires of both crises of energy and supply. The overall cryptoasset market increased by almost 7% over the past month to rest at a little over $1T. Bitcoin and Ethereum increased by 5% and 18% over the past month. Other winners this month were Metis and Maker, jumping by almost 20% and 22% respectively. Boba performed better than its peers within the major L2s regarding total value locked (TVL), reaching almost 30%, as shown in the figure below illustrating the performance of the top cryptoassets within the major categories, month over month. 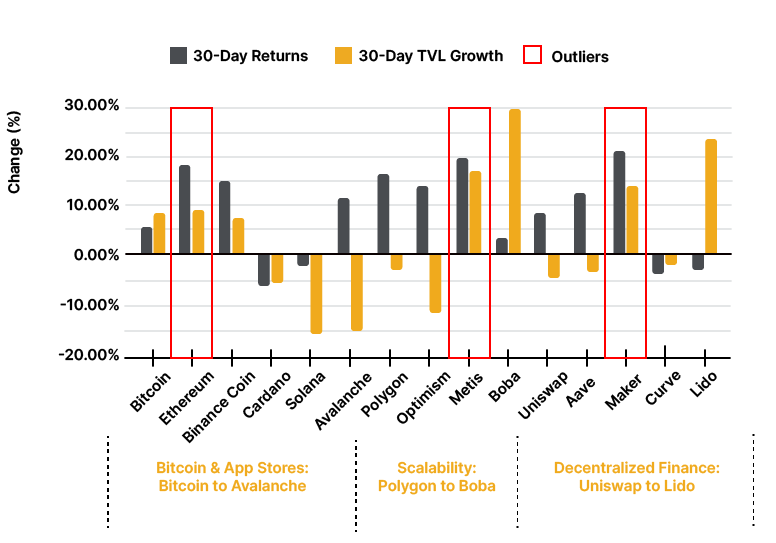 Key takeaways from this report:

The last week of October saw liquidations of short positions totalling to a little over $1.7B, which were also in tandem with rising US equities benefiting from the weakening US dollar. The liquidations breathed hope into Bitcoin, jumping back to $20K levels. 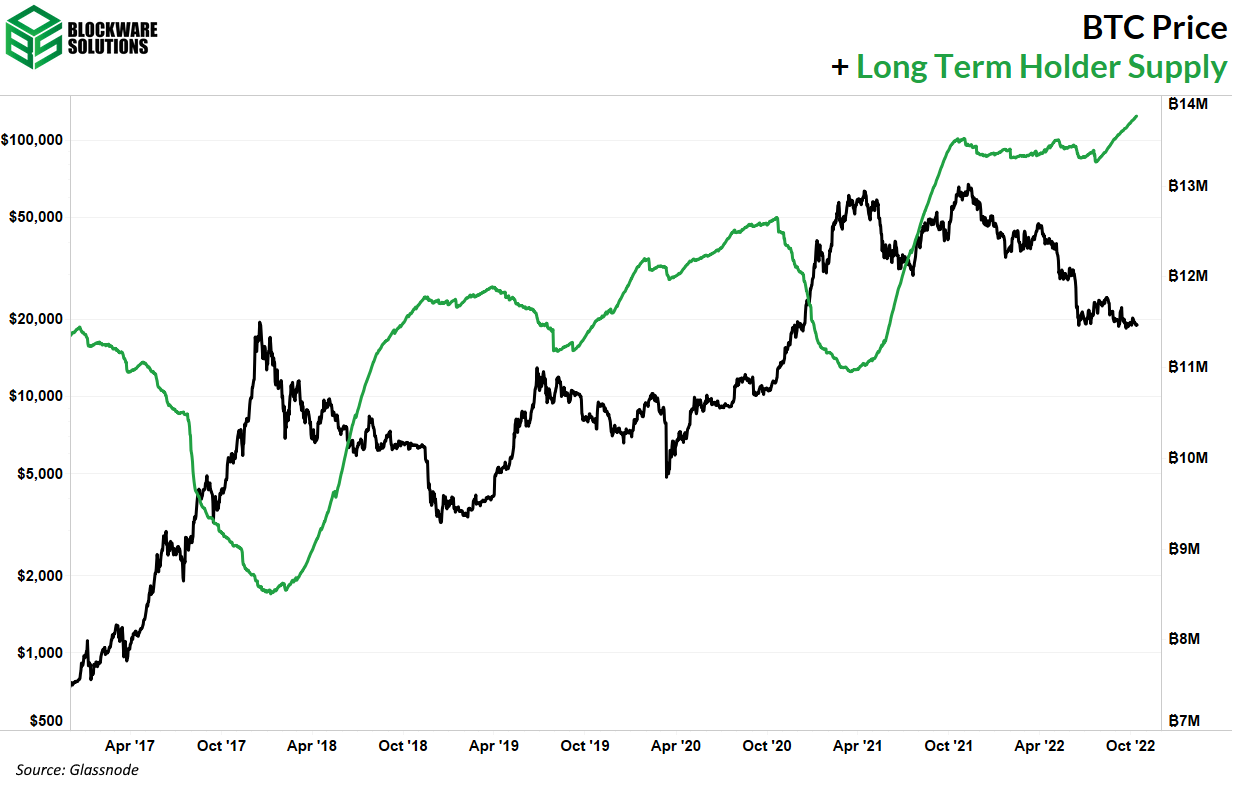 As shown in Figure 3, the total supply in the hands of long-term Bitcoin holders has reached a new all-time high of over 13.5M Bitcoins. This reiterates the conviction that the value of Bitcoin lies in its long-term investment, given that long-term holders are the winners of Bitcoin’s rally.

Annual inflation in the US rose by 8.2% after the country’s Consumer Price Index recorded a 0.4% increase in September. At the time of writing, CME data forecasts a 89.3% chance of a 75 basis point rate hike at the Federal Reserve’s next monetary-policy meeting on November 2. If the predictions materialize, the hike would be triple the Fed’s more typical increment of 25 basis points in prior interest-rate cycles. In quite a timely manner, right ahead of releasing the CPI data, America’s oldest bank, Bank of New York Mellon, started its endeavors with crypto holdings, becoming the first large US bank to safeguard crypto assets. In its Q3 earnings report, Tesla is revealed to be holding $218M worth of Bitcoin. Tesla’s holdings from Q2 to Q3 remain unchanged, and in its essence, this shows that institutional money still finds safety in this asset class during times of almost-recession.

Bitcoin Mining. In September the White House published a report on crypto mining that recommends disclosing energy consumption and environmental standards to be set by inter-federal agencies such as the Environmental Protection Agency and the Department of Energy. On October 12, Elizabeth Warren sent a letter addressing the Electricity Reliability Council of Texas (ERCOT) asking how much energy ERCOT is providing crypto mining companies. Nevertheless, Binance launched a $500M pool to support loaning Bitcoin miners affected by the macroeconomic events. Digital Currency Group subsidiaries Grayscale and Foundry are launching "Grayscale Digital Infrastructure Opportunities" to invest in Bitcoin mining hardware. The organizations will use the invested capital to purchase mining equipment at discounted prices.

Europe's Markets in Crypto Assets – the European Council has passed a landmark crypto regulation dubbed MiCA to the parliament. At 21Shares, we are incredibly excited about crypto regulations like MiCA that is expected to limit exploits and provide more immunity to hacks. If approved, the bill will be in effect as of 2024. Cryptoasset service providers (i.e., trading platforms) must make settlement transactions within 24 hours. The regulation doesn't address lending and borrowing protocols. MiCA will oversee all cryptoassets not currently regulated by existing financial services legislation. Regarding NFTs, the European Securities and Markets Authority (ESMA) will be responsible for classifying them, and only NFTs which serve as financial instruments will likely fall under MiCA's scope.

As for stablecoins, issuers will need to oblige to a significant number of authorization criteria, including a clause stating that stablecoins must be backed 1:1 by reserves that are legally and operationally segregated. USD-backed stablecoins will face some limitations when MiCA comes into effect due to efforts related to preserving the monetary sovereignty of the euro. Moreover, a few days after the UK got its first person of color and crypto ally as prime minister, the House of Commons voted in favor of recognizing payments-focused stablecoins as regulated financial instruments and products in the country. In September, New York Judge Katherine Failla ordered Tether to provide financial statements to prove the 1:1 backing of the company’s dollar-pegged stablecoin, USDT. To this effect, Tether vowed to the industry that it would get rid of commercial paper backing its reserves, and it indeed kept its promise. 80% of Tether’s reserves is now made up of cash equivalents and short-term deposits, of which more than 70% of the company’s cash equivalents are US treasury bills.

ETH-centric Updates – Ethereum is fulfilling one of the key pledges of the Merge as it continues to maintain its deflationary status in its first month as a green blockchain. ETH had an impressive burn rate in the past few weeks due to the increased speculative trading activity triggered by Vitalik's light-hearted commentary that someone should create a token called "THE" as a joke. The meme token surged by 1000% over the following days, spawning other playful meme tokens such as DIE, which also rose by roughly 5500% and expectedly crashed afterwards. What's worth pointing out here is the economic ramifications of the switch to PoS, as ETH now doesn't demand a lot of network activity to turn deflationary since the daily issuance significantly decreased. Ethereum burnt 10K ETH over the past month and is now en route to reaching pre-merge supply levels. On another note, one of the critical issues Ethereum has been grappling with is Maximal Extractable Value (MEV), a process by which validators increase their profits by reordering transactions within blocks they produce. In this regard, Flashbots announced the SUAVE (Single Unifying Auctions for Value Expression) this month, a toolkit that will decentralize the block production process, and introduce a more diverse set of block proposers.

Upticking Scalability. on October 26, we were on the brink of witnessing history as the L2 transaction count almost surpassed the transaction count of the Ethereum base chain. We also saw a handful of noteworthy developments:

Interoperability. The Cosmos ecosystem keeps building momentum after the release of the network’s new roadmap, intended to make ATOM the preferred reserve asset in the Cosmos ecosystem. On October 14, Circle announced that it plans to make USDC accessible on Cosmos via a neutral asset issuance chain that leverages the Inter-Blockchain Communication (IBC) protocol and the Hub’s Interchain Security, which will be available in early 2023, to benefit from the security of the validators supporting the Cosmos Hub. 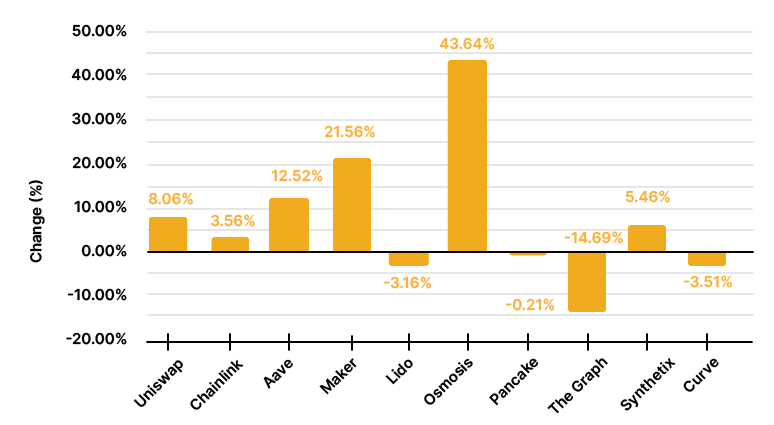 DEXs. Pancake Swap, the largest DEX on the BNB chain by trading volume, pushed a new governance proposal to expand to the Aptos ecosystem. The exchange – which went live on the network after a 97% approval – is now also available on Ethereum and BNB. On another front, Algorand’s TVL experienced a major boost on the back of several developments. Crypto-native VC firm Hivemind deployed $200M worth of capital into multiple DeFi protocols projects. FTX also announced their support for native USDC on Algorand, while FIFA announced its FIFA+ collect program – an Algorand-native marketplace for iconic historical moments in the form of digital collectibles (NFTs). Uniswap, DeFi’s largest DEX by trading volume, has just passed a governance vote that will see the protocol’s deployment on zkSync. As discussed in the previous newsletter, zk-Rollups are considered the “holy grail” of scalability. Thus, Uniswap’s launch on zkSync is a significant undertaking as the DeFi ecosystem can start growing beyond Ethereum’s base chain capabilities. DEXs are the substratum that lives underneath asset management, lending, and yield-aggregation primitives, which glues together the different moving parts of DeFi.

Stablecoins. Binance expanded its Layer-1 integration of its BUSD token by deploying a native version on the Polygon chain. BUSD now lives on Ethereum, BNB, Avalanche, and Polygon. Inter Chain also debuted their fully collateralized dollar-pegged stablecoin – IST – a decentralized stable for the Cosmos ecosystem. The project is being developed by Agoric, the open-source development company maintaining the Cosmos SDK. Furthermore, Frax Finance, the protocol behind the semi-collateralized and algorithmic stablecoin FXS, announced their venture into the liquid staking business. As a reminder, liquid staking allows users to delegate their Proof-of-Stake assets to a third party to earn yield without having to lock their funds. That said, Frax will face fierce competition as it introduces frxETH to a vertical currently dominated by with other players like Lido, Coinbase, Rocketpool and Ankr. Frax's decision is an excellent move for ETH's decentralization. As Lido dominated ETH2 deposits over the past month, thanks to the product's attractiveness and first-mover advantage, the liquid staking solution for ETH became responsible for a huge portion of its block production, and raised concerns of centralization on the consensus layer. Thus, having a more inclusive validator set should help promote censorship resistance at the protocol level.

Although trading volume declined by almost 23% month over month, and 71% year over year, adoption is nevertheless on the rise, with traders increasing by 17% over the past month, marking an all-time high in October. Moreover, trademarks filed in the US for NFTs and related blockchain goods and services have doubled year over year, according to Mike Kondoudis, a USPTO licensed trademark attorney. Formula 1 is racing towards Web 3 by filing for trademarks under the name “F1” to cover cryptocurrencies, crypto marketplaces, trading and mining, and retail stores for virtual goods on the metaverse. In addition, formula 1 has a track record of supporting and promoting the crypto industry in its tournaments to the extent of getting on the regulatory radar. Moreover, world-renowned veteran actor Sir Anthony Hopkins is partnering with Orange Comet to launch an NFT collection that randomly selects holders for a 1-1 Zoom call. Orange Comet is an NFT production and promotion company specializing in art, sports, and entertainment, bringing NFTs into Hollywood. This move inspires a plethora of use cases not only for entertainment but also for education and mentorship portals like MasterClass that are yet to utilize the technology.

The tokenization of real estate also saw adoption in October. Roofstock, a real estate platform, facilitated the sale of a South Carolina house on OpenSea for $175K. Teller Finance was also among the facilitators, joining the effort as a lending partner.While being sold on a decentralized ledger brings about the perks of lower transactional costs and more, tokenization of real estate is being battle-tested, arguably at the best time for battle tests, under many horizons such as demand and regulatory approval. 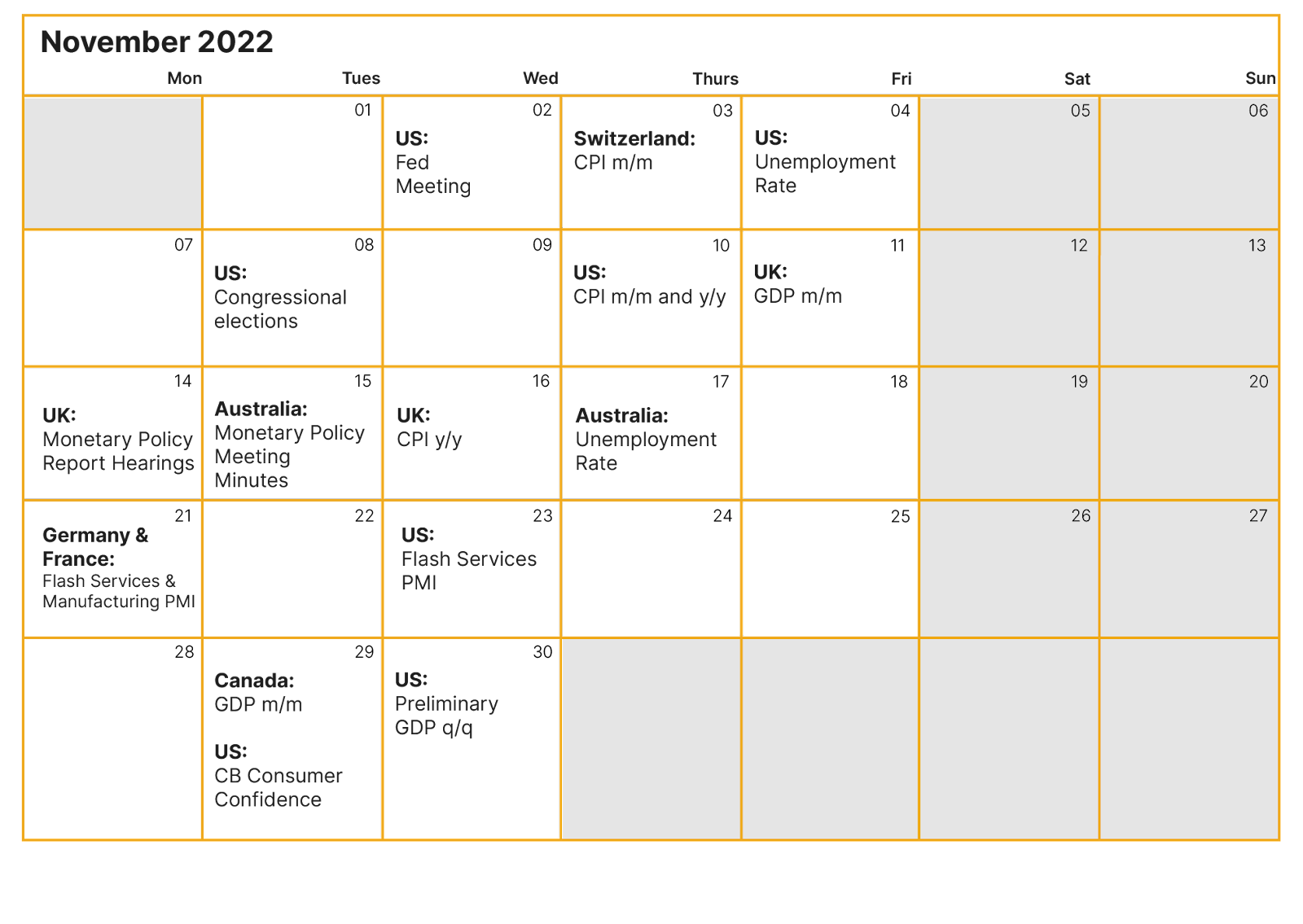