Cryptoassets of the Month: October 2022 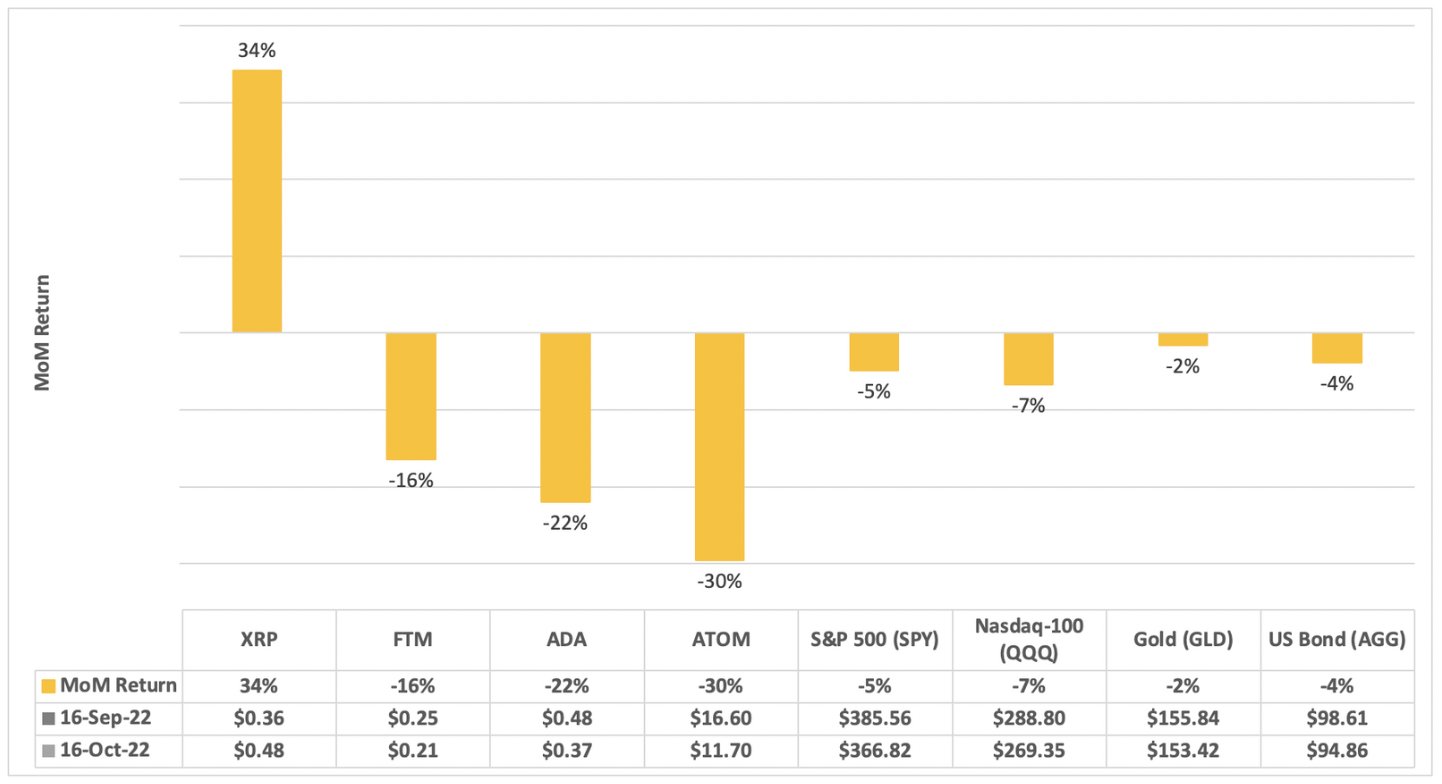 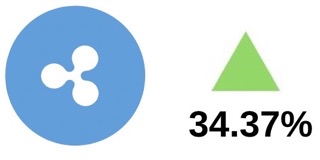 XRP rose 34.37% over the past month as investors speculate that its legal battle against the SEC seems to be nearing its end. In December 2020, the SEC filed a lawsuit against Ripple, arguing that XRP satisfies the Howey test's requirements and is thus a security under U.S. laws. On September 17, both parties agreed to forgo a trial, opting for a summary judgment that could happen before year-end. In addition to court-related developments, on October 17, RippleX announced that XRP Ledger is testing its first EVM-compatible sidechain to bring Ethereum smart contracts to the XRP ecosystem.

Fantom's native token FTM traded down 16.60% over the past month. Despite the negative market sentiment, there have been some exciting developments. On October 3, the Fantom Foundation partnered with Moralis and Google Cloud to offer developers $25,000 in prizes for building DeFi applications on Fantom. In addition, the governance proposal to reduce annual staking yield from about 13% to 6% was successfully passed on October 5.

Cardano's native token ADA traded down 22.11% over the past month, underperforming the broader market. On September 22, Cardano's long-anticipated Vasil upgrade triggered, enabling increased network capacity, higher throughput, and lower transaction costs on the smart contract platform. Furthermore, EMURGO – a business incubator and founding member of Cardano – announced a $200 million investment in the Cardano ecosystem over the next three years.

The Cosmos Hub's native token ATOM traded down 29.52% over the past month despite the anticipated release of the network’s new roadmap, intended to make ATOM the preferred reserve asset in the Cosmos ecosystem. In another exciting development, Circle announced that it plans to make USDC accessible on Cosmos via a neutral asset issuance chain that leverages the Inter-Blockchain Communication (IBC) protocol and the Hub’s Interchain Security.

Strategies of the Month: October 2022

Every month, our research team will also present the ten best-performing strategies of the month in our product suite. With a data-driven approach, we highlight the most important developments and events causing price movements. 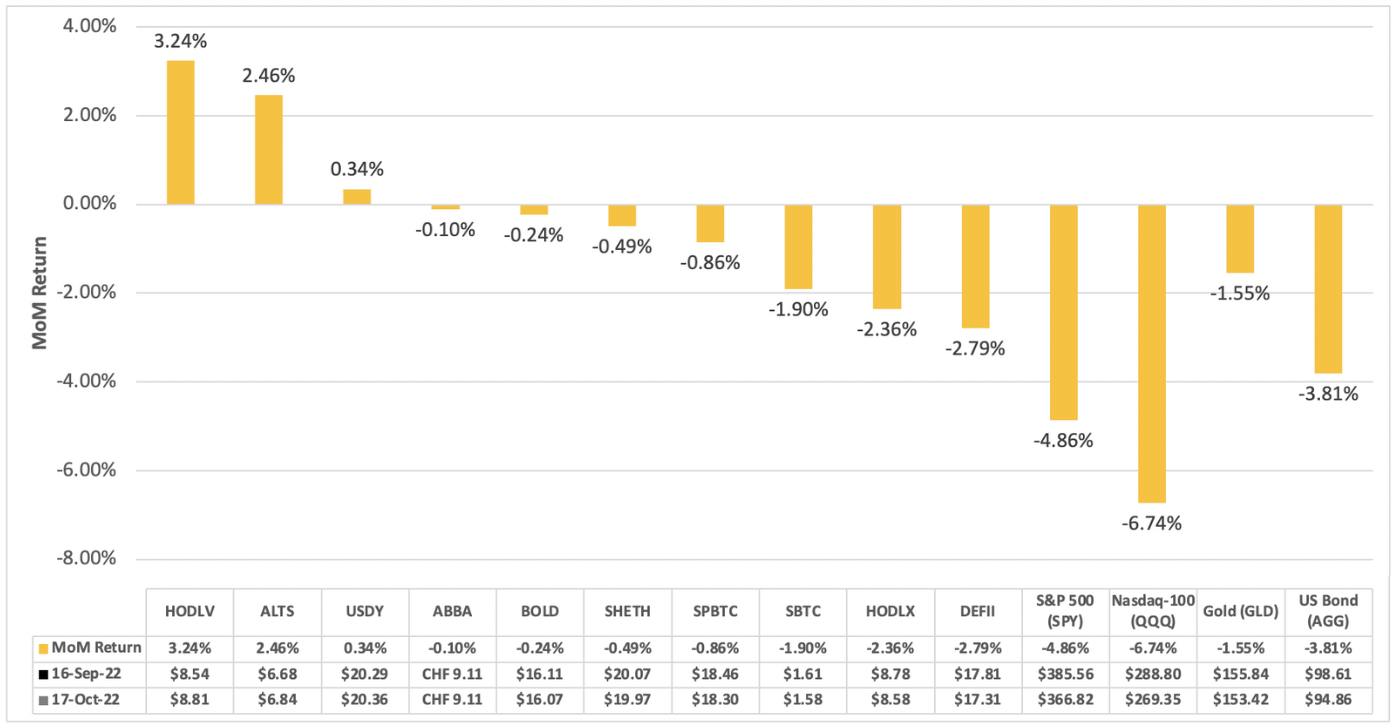 The 21Shares Crypto Basket Equal Weight ETP (HODLV) appreciated 3.24% over the past month. HODLV tracks the investment results of an equally-weighted index composed of the top 5 largest cryptoassets based on market capitalization. The index's positive performance is attributed to XRP's inclusion. As we mentioned, XRP rose 34% in the past month as investors speculate that the legal battle over the SEC lawsuit is finally nearing its end.

The 21Shares Crypto Mid-Market Index ETP (ALTS) appreciated 2.46% over the past month. ALTS seeks to track the investment results of an index capturing the mid-cap portion of the cryptoasset market. XRP, with a weight of 21%, was also responsible for this index's positive performance. In addition, BSC – the largest constituent with a weight of 38% – dropped 0.87% as Binance Smart Chain's cross-chain bridge got hacked for 2 million BNB ($560 million).

The 21Shares USD Yield ETP (USDY) was up 0.34% over the past month. USDY provides exposure to USD while using the collateral (USDC) to seek to generate income from the digital asset lending ecosystem via a fully collateralized ETP structure. The U.S. dollar is the world's reserve currency and has acted as a "safe haven" during this year's adverse macroeconomic conditions. To put into perspective its strength, the DXY index, which tracks the dollar's strength against a basket of major currencies, has reached levels not seen since 2002, in the late stages of the dot-com crash.

The 21Shares Bitcoin Suisse Index ETP (ABBA) traded down 0.10% over the past month. ABBA seeks to track the investment results of an index composed of Bitcoin and Ethereum based on market capitalizations. Investors should understand that Bitcoin and Ethereum serve different use cases and can complement each other in a portfolio, with the former positioning as a non-sovereign form of money while the latter promises to be the foundational infrastructure for the new iteration of internet services.

The 21Shares Bytetree BOLD ETP (BOLD) traded down 0.24% over the past month. BOLD offers volatility-managed exposure to Bitcoin and Gold. Both assets have a low correlation between them, as Gold provides safety in hostile macroeconomic environments while Bitcoin captures the growth of the digital economy. For instance, while Bitcoin is down almost 58% year-to-date, Gold has only dropped 8% over the same period, signaling that the former is still viewed as a risk asset.

The 21Shares Short Ethereum ETP (SHETH) traded down 0.49% over the past month. SHETH seeks to provide a -1x return to the performance of Ethereum for a single day. Despite a successful Merge and strong fundamentals, ETH's high volatility and the current macro environment may allow investors with stringent risk-management practices to benefit from tactical short-term inverse exposure to ETH. 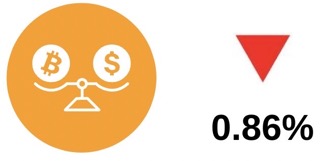 The 21Shares S&P Risk Controlled Bitcoin Index ETP (SPBTC) traded down 0.86% over the past month. Over the same period, Bitcoin traded down 2.73%. SPBTC achieved a better performance due to its rebalancing algorithm, which limits the volatility of the S&P Bitcoin Index to a target level of 40% by adjusting the exposure to the underlying index and allocating to U.S. dollars.

The 21Shares Short Bitcoin ETP (SBTC) traded down 1.90% over the past month. SBTC seeks to provide a -1x return to the performance of Bitcoin for a single day. Bitcoin's high correlation to equities during this market downturn signals that BTC has become increasingly institutionalized and that new market participants still view it as a risk-on asset. This may allow sophisticated investors to benefit from tactical short-term inverse exposure to BTC.

The 21Shares Crypto Basket 10 ETP (HODLX) traded down 2.36% over the past month. HODLX seeks to track the investment results of an index composed of the top 10 largest cryptoassets based on market capitalization. Because Bitcoin and Ethereum currently represent about 60% of the global crypto market capitalization, the index's performance can be biased toward both assets, as was the case over this period.

The 21Shares DeFi 10 Infrastructure ETP (DEFII) traded down 2.79% over the past month. DEFII tracks the investment results of an index of decentralized applications and their underlying infrastructure. The index's best-performing asset was Uniswap, which appreciated 5.16% over the same period. Our thesis has been that Uniswap is the "Trojan Horse" to conquer the market-making business for some time. To date, the protocol has supported $1.2 trillion in trading volume. Additionally, on October 13, Uniswap announced a $165 million raise in Series B funding led by Polychain Capital.

This document is not an offer to sell or a solicitation of an offer to buy or subscribe for securities of 21Shares AG. Neither this document nor anything contained herein shall form the basis of, or be relied upon in connection with, any offer or commitment whatsoever in any jurisdiction. This document and the information contained herein are not for distribution in or into (directly or indirectly) the United States, Canada, Australia or Japan or any other jurisdiction in which the distribution or release would be unlawful.This document does not constitute an offer of securities for sale in or into the United States, Canada, Australia or Japan. The securities of 21Shares AG to which these materials relate have not been and will not be registered under the United States Securities Act of 1933, as amended (the “Securities Act”), and may not be offered or sold in the United States absent registration or an applicable exemption from, or in a transaction not subject to, the registration requirements of the Securities Act. There will not be a public offering of securities in the United States.This document is only being distributed to and is only directed at: (i) to investment professionals falling within Article 19(5) of the Financial Services and Markets Act 2000 (“FSMA”) (Financial Promotion) Order 2005 (the “Order”); or (ii) high net worth entities, and other persons to whom it may lawfully be communicated, falling within Article 49(2)(a) to (d) of the Order (all such persons together being referred to as “relevant persons”); or (iii) any other persons to whom this document can be lawfully distributed in circumstances where section 21(1) of the FSMA does not apply. The securities are only available to, and any invitation, offer or agreement to subscribe, purchase or otherwise acquire such securities will be engaged in only with, relevant persons. Any person who is not a relevant person should not act or rely on this document or any of its contents.In any EEA Member State (other than the Austria, Belgium, Croatia, Denmark, Finland, France, Germany, Great Britain, Hungary, Ireland, Italy, Liechtenstein, Luxembourg, Malta, The Netherlands, Norway, Poland, Romania, Slovakia, Spain and Sweden) that has implemented the Prospectus Regulation (EU) 2017/1129, together with any applicable implementing measures in any Member State, the “Prospectus Regulation”) this communication is only addressed to and is only directed at qualified investors in that Member State within the meaning of the Prospectus Regulation.Exclusively for potential investors in Austria, Belgium, Croatia, Denmark, Finland, France, Germany, Great Britain, Hungary, Ireland, Italy, Liechtenstein, Luxembourg, Malta, The Netherlands, Norway, Poland, Romania, Slovakia, Spain and Sweden the 2021 Base Prospectus (EU) is made available on the Issuer’s website under www.21Shares.com.The approval of the 2021 Base Prospectus (EU) should not be understood as an endorsement by the SFSA of the securities offered or admitted to trading on a regulated market. Eligible potential investors should read the 2021 Base Prospectus (EU) and the relevant Final Terms before making an investment decision in order to understand the potential risks associated with the decision to invest in the securities. You are about to purchase a product that is not simple and may be difficult to understand.This document constitutes advertisement within the meaning of the Swiss Financial Services Act (the “FinSA”) and not a prospectus. In accordance with article 109 of the Swiss Financial Services Ordinance, the Base Prospectus dated 12 November 2021, as supplemented from time to time and the final terms for any product issued have been prepared in compliance with articles 652a and 1156 of the Swiss Code of Obligations, as such articles were in effect immediately prior to the entry into effect of the FinSA, and the Listing Rules of the SIX Swiss Exchange in their version in force as of January 1, 2020. Consequently, the Prospectus has not been and will not be reviewed or approved by a Swiss review body pursuant to article 51 of the FinSA, and does not comply with the disclosure requirements applicable to a prospectus approved by such a review body under the FinSA.