Issue 168: Behold the Merge, Mixers Under Scrutiny, New Web3 Phone, and More!
This Week in Crypto

Inflation is at a record high of 9.1%, with fears next hike might be 100 basis points, although Fed officials signaled that they would stick to a 75-bp rate increase during their meeting last month. Moreover, the European Central Bank is expected to raise rates by 25 bps at its policy meeting later this week. The crypto market however has been working upwards, with Bitcoin improving by 3.6% over the past week. Ethereum is performing exceptionally better, by 27.3% since last Monday, as the Merge inches closer towards reality after the ninth shadow fork went live on July 15. In the meantime, equities have been sluggish over the past week with S&P 500 index declining by 0.63%, whereas the NASDAQ composite dipped by 0.56% and Dow Jones Industrial Average barely moved with a 0.18% decline.

In a recent report, Chainalysis revealed that 10% of all funds coming from illicit addresses are sent to crypto mixers, such as Tornado Cash and Blender.io that has been recently sanctioned by the US on the back of the infamous Axie Infinity hack, where $620M in cryptoassets were stolen. As shown below, the 30-day moving average reached an all-time high of $51.8M worth of cryptocurrency on April 19. 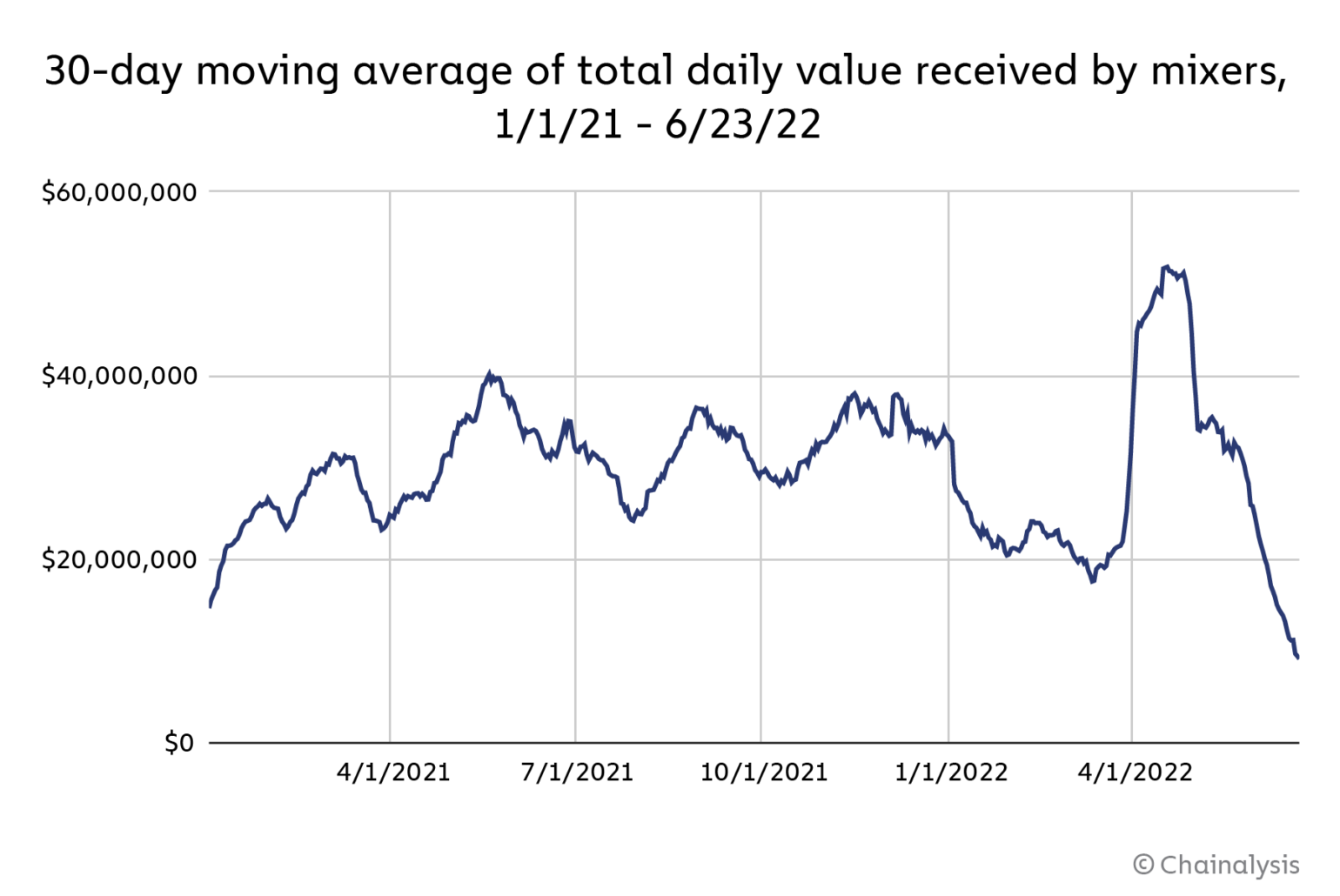 Russia passed a law banning digital assets as payments, making it illegal to pay for goods and services in crypto. This comes after a sharp U-turn the Russian president took back in February to legalize cryptoassets as a payment method, which was another sharp pivot from the Russian central bank's proposed ban on the mining and use of cryptocurrencies, dubbed as a strategic move to quash opposition crowdfunding donations through BTC after having their bank accounts subdued. Moreover, the Russian parliament is also considering two bills, one regulating crypto miners and the other setting requirements for companies dealing with cryptoassets.

In the US, the Treasury is asking the public for input on the benefits and risks that come with cryptoassets. On the other hand, Democrats launched an investigation into energy use at the country’s seven largest crypto mining companies. The findings were published on Friday, showing that the seven companies alone consume as much as 1,045 megawatts of power, enough electricity to power all the residences of Houston, the fourth-largest city in the US with 2.3 million residents. While the energy consumption of Bitcoin mining could be worrying, this is an analogy that we dread at the Research Team, especially knowing that traditional finance’s energy consumption surpasses miners’ around the world by 56%.

In a remarkable step that speaks volumes about legal adaptation to emerging technologies, a UK court is allowing the founder of Microgame, an online gambling company based in Italy, to file a lawsuit against anonymous people through an NFT drop. The will allow the founder to serve legal documents to people who are not known but are connected to two digital wallets. As the case currently stands, this also counts as progress in terms of not confusing the culprit with blockchain technology.

One chief metric that depicts the moderate shift in momentum has been the net transfer aggregate to and from exchanges. By looking at the number of inflows and outflows, we can see that the 17th of June marked the second biggest outflow of BTC (~60K BTC) from all trading platforms since July of 2016 - the period preceding the last bull cycle which took off in 2017. The figure was higher than that of covid and the bottom of the last bear cycle in June of 21. 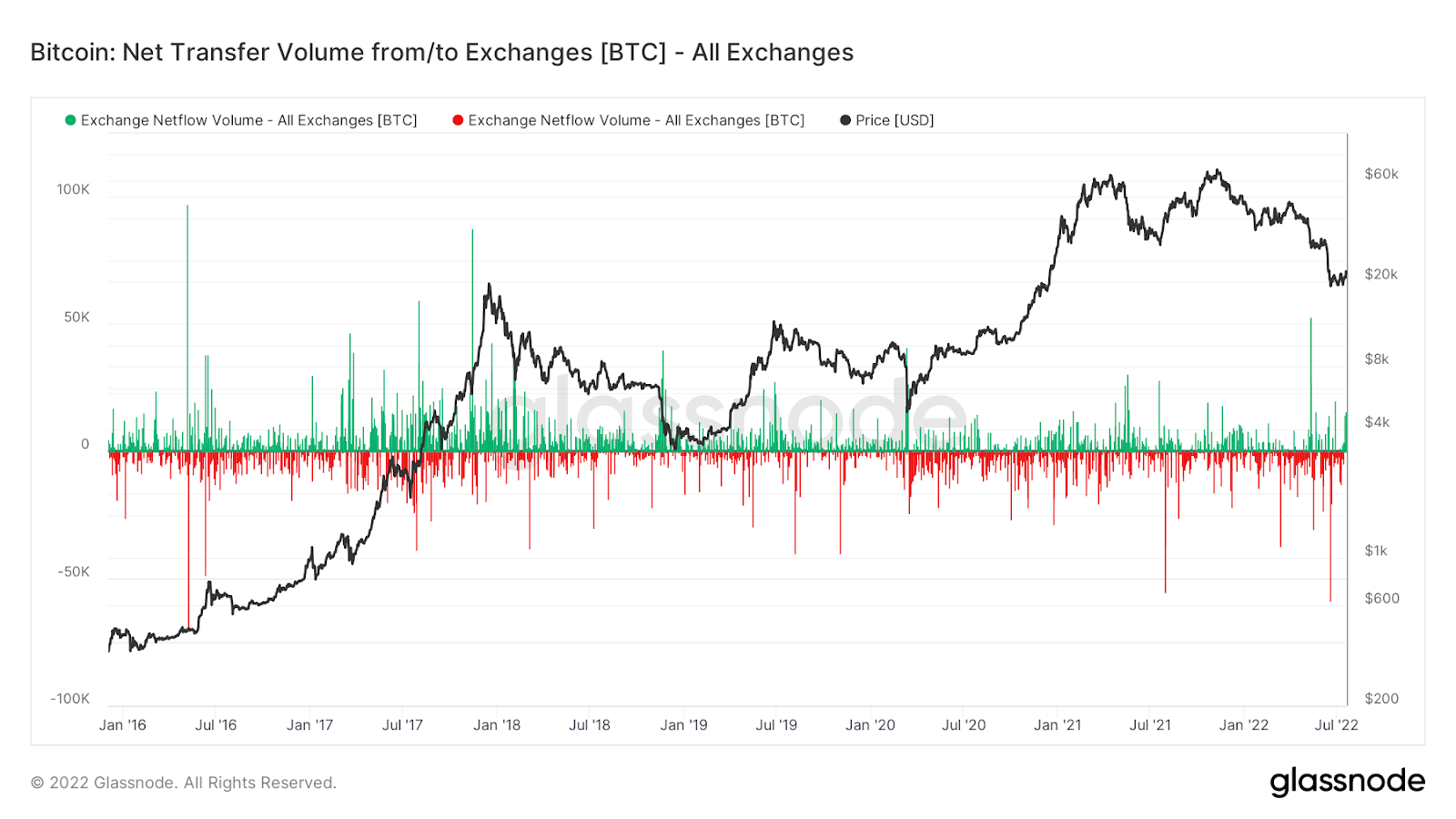 This deviation in momentum can explain that the selling pressure that was instigated by the consecutive devastating events that started with Luna, and spilt over to 3AC, celsius and the other big names in the space, could be running dry. That said, it doesn’t mean that the contagion of all of these insolvent firms is over yet, only shows that the wider market participants see the current price level as one of extremely high interest.

Continuing to bridge between TradFi and DeFi, the industry giant MakerDAO has officially enlisted Societe Generale to the protocol’s vaults. The passed proposal should now see Societe Generale Forge, a subsidiary of the French bank, use its OFH token as collateral in order to borrow up to 30M in DAI tokens. OFH are euro-denominated covered bonds rated Aaa and AAA by Moody’s and Fitch, respectively.

The notion of tokenized debt securities isn’t a new phenomenon, as JPMorgan’s permissioned Onyx digital assets blockchain has already processed $350B worth of trading volume for onchain bonds. What differentiates MakerDAO’s move is its reliance on a public network (ETH) to oversee the issuance of new bonds/securities as well as unlocking further utility for them by designating them as collateral to take out loans against. This is a key development that we’ll be closely watching as we believe that the world has barely scratched the surface of what is possible with tokenization.

Another notable development this past week revolved around a new project - CredProtocol - devising an on-chain credit score. The protocol’s ML-based scoring system will rely initially on historical borrowing activity data from Aave to build a classifier accounting for elements such as health factors and collateral/debt ratio to predict the possibility of a future liquidation for a specific address. This should be a remarkable evolution for DeFi as the industry is still seen as capital inefficient due to the onerous requirement of over-collateralization.

In a similar vein, the stablecoin vertical had its fair share of attention as we first saw Tether expand its USDT coverage to the embryonic OKXChain, meanwhile, the accounting giant KPMG was appointed to audit the monthly reserves of the new fully-sterling-backed pound-token (GBPT). The new stablecoin had just gone live today on several TIER2 exchanges, and is expected to be deployed to the Uniswap within a few days. On that note, the leading DEX has broadened its list of supported networks and went live on the Celo network.

Finally, Circle published a comprehensive report to break down its USDC reserves and shut-down any unwarranted rumors. The disclosing has shown that almost 35% of its reserves sit in cash, while the rest is invested in short-term US treasuries with maturity dates averaging less than 45 days.

Last week was not a pleasant one for NFT marketplace Opensea, which laid off about 20% of its employees. While it may seem like the end of the road to some, the silver lining is that last week saw some new promising beginnings. Barely 48 hours after Gamestop launched its NFT marketplace, the trading volume recorded $3.5M while it’s still in beta. This is almost twice the trading volume on Coinbase NFT platform which has been live since May.

The Syscoin layer-1 blockchain has completed integrating the Luxy NFT marketplace, the first official NFT marketplace available on Syscoin. Luxy is a marketplace to buy and sell NFTs, a collection launchpad, which also includes support for audio and video tokens and offers discounts for LUXY token holders.

HSBC’s inaugural on Sandbox seemed to have motivated KEB Hana Bank in South Korea to offer banking services in the metaverse. Users can access the virtual branch of the bank and request basic banking services like experiencing coloration opportunities and getting insight into promoted investment.

Samsung Electronics launched its Space Tycoon, a virtual playground built inside the metaverse platform Roblox, a global gaming platform that has quietly integrated NFTs. Space Tycoon is a virtual space where users can create and play games and share experiences using Samsung Electronics’ products together with alien characters in space, taking design and functionality cues from the business simulation ‘tycoon’ genre.

The major catalyst that might be driving crypto’s momentum, from within the confines of the industry, was the tentative declaration around when the ETH 2.0 merge would take place. Tim Beiko’s soft timeline hinted that the final PoS switch should occur around late September, even though the schedule is very likely to change. Ethereum scaling solutions have also been making headlines this past week:

On the other hand, the L1 blockchain targeting mobile users - Celo - suffered a 24-hour network outage for the first time since its inception. The network is back online after Validators executed an update. Finally, the BNB network unveiled a new dApp, DappBay, that will alert users of potential scams and rugs. The protocol will feature a risk scanning tool, Red Alarm, that examines smart contracts for logical flaws or fraud risks and alerts users accordingly.

Within L0s, the Cosmos community just approved its latest improvement proposal which would give it a much-needed boost to its tokenomics. The first part of the vote introduced liquid staking, inspired by how CLUNA was utilized on the LidoFinance platform. The other was concerned with interchain security, a similar network-security design to Polkadot, where newer projects are able to rent out security by leveraging the core cosmos-hub 176 main validator set. Fees for both economic activities will be paid in ATOM, and thus the token will play a much bigger role in the ecosystem and its organic demand should increase. Neutron, a new app-specific chain, will be inaugurated to serve as a launch environment for interchain finance. Finally, Starknet confirmed they will be releasing a native token by September, as part of their roadmap to fully decentralize the ecosystem. The token is slated to be used for staking, governance and network fees.

It’s been close to a month and the crypto market is still seething with the financial armageddon instigated by the collapse of Luna, and the resulting insolvency of some of the biggest names within the space.

Other firms are attempting to make their affected customers whole:

Blockchains on both layers 0/2 are subject to welcome new oracle protocols to their ecosystems. Umee; the Cosmos-based lending and borrowing protocol, will launch an oracle to track pricing feeds for some of the network’s native assets. Meanwhile, a new project dubbed AresProtocol is slated to join the ranks of other cross-chain oracles living on top of Polkadot. Finally, the Starknet ecosystem will also embrace its own ZK-native oracle that will help in sourcing data directly from exchanges and market makers. Oracles are the invisible backbone of DeFi, and so we expect more solutions to enter the market in order to service the ever-expanding landscape of the L0/1/2 sectors. 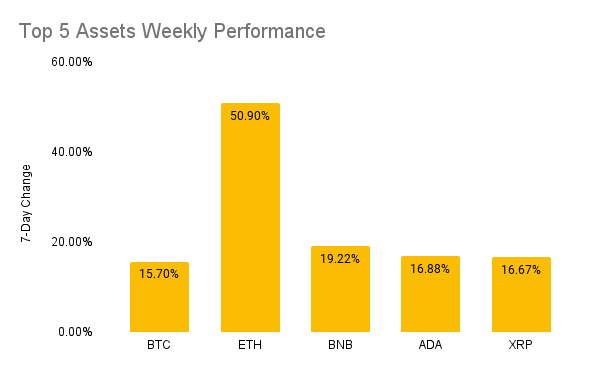 Ethereum scaling solution Polygon has partnered with phone maker Nothing to bring Web3 tech to the company’s first mobile phone, the Android-based Nothing Phone (1). The move will essentially grant the phone users with easy access to apps and games on Polygon’s platform, and along the way, Nothing will bring payments and future features like Polygon ID, the company’s zero-knowledge, and proof-based identification solution.

Polygon’s announcement uncannily follows Solana's announcement of Saga, also a flagship Android-based phone with Web3 features. But before these two, Sirin Labs announced they’re building a blockchain phone in 2018 and its product is still alive on the shelves, however, it seems it has been drowned by the 25% layoffs and a lawsuit for unpaid $6M in factory bills dating back to two years ago. work marks a resurrection of efforts to develop a blockchain-native phone.

What’s different today with Solana and Polygon’s phones is mainly the utility and the community. Time is on their side with regards to the traction Web3 has been collecting. However, whether the world is ready for an Android-based phone with Web3 functionality, might be tricky given that phones have become the Rolex of today’s vanity. It will be a tough argument today, but just like the metaverse didn’t work in 2017, Web3 phones might be a hit in the future. 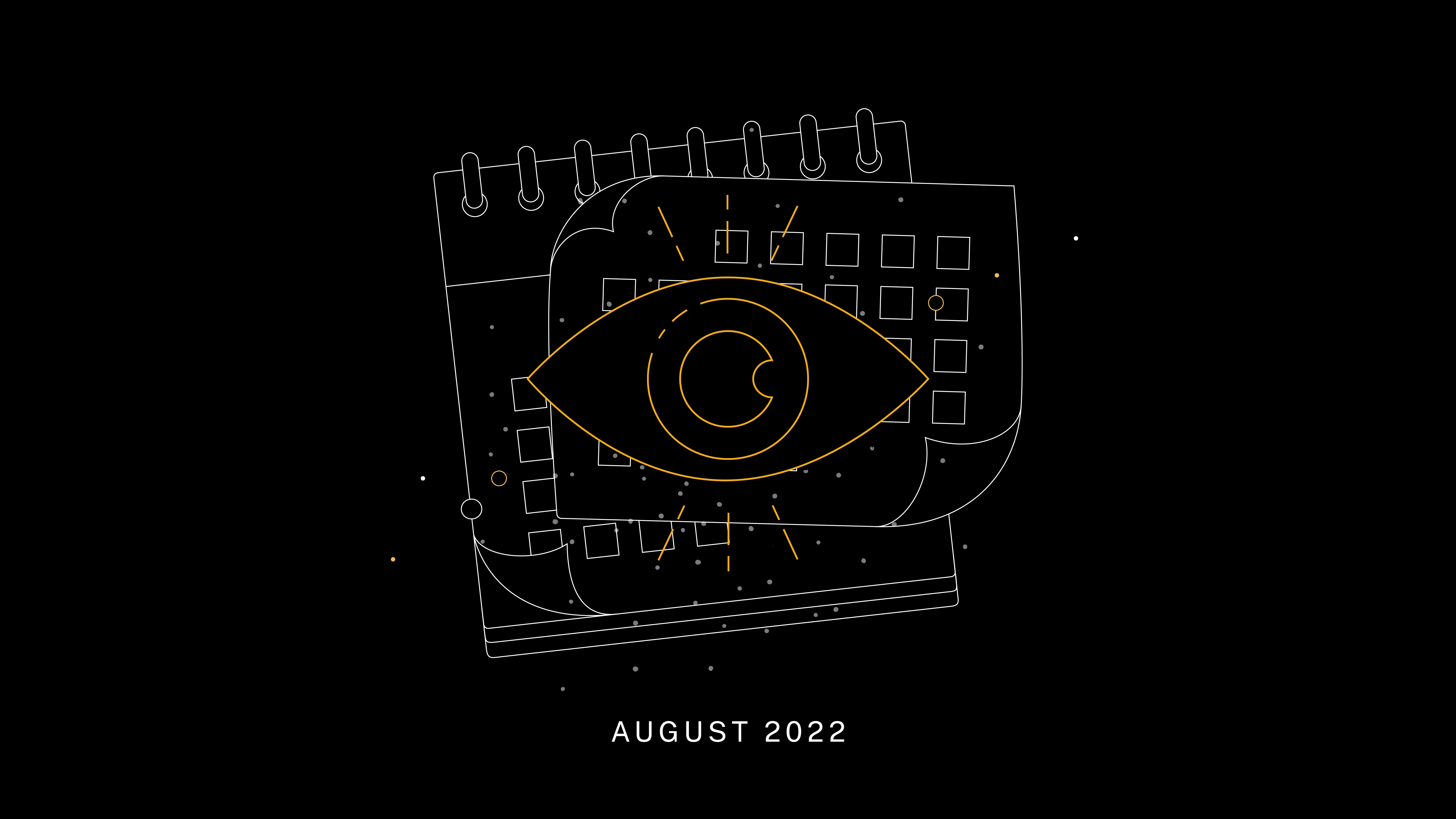